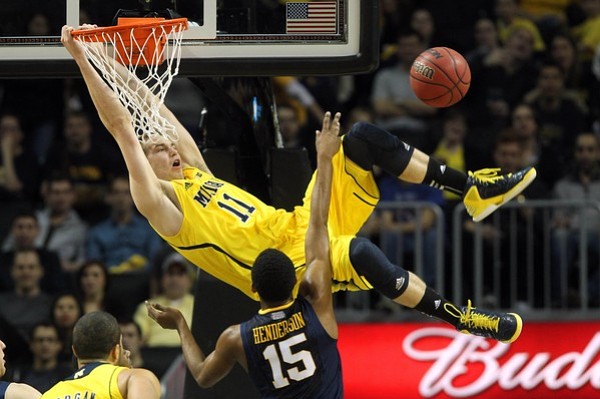 This week serves up a steady diet of cupcakes on the Big Ten men's basketball schedule, but the weekend includes a number of high-profile games. And as we saw with Indiana's stunning overtime loss to Butler that dropped the Hoosiers from No. 1 to No. 6 in the both polls, you always must be on guard.

The one key game before the weekend is Stanford?s visit to Northwestern. How will the Wildcats respond against a solid Cardinal team without injured Drew Crawford? This will be a good snapshot into Northwestern?s future the rest of the season.

In general, Games like Florida Atlantic at Indiana, Eastern Michigan at Michigan, South Carolina State at Iowa. and Jackson State at Nebraska dot the Big Ten menu from Monday through Friday. Get the picture? It?s a veritable holiday feast for Big Ten schools, a time to sit back, get fat and happy and pad that win total, as some schools are taking it easy during finals week.

But on Saturday, things heat up with three interesting games: Kansas at Ohio State; Illinois vs. Missouri in St. Louis; Texas at Michigan State. It's part of a seven-game slate.

Game of the week: No. 8 Kansas at No. 7 Ohio State. This is a classic clash of titans between Top 10 teams. It?s all about testing your roster and looking for areas of improvement before conference play commences. And, no doubt, a win here will look good on the NCAA tourney resume when it comes to seeding teams. These heavyweights met last December in Lawrence with the No. 13 Jayhawks taking a 78-67 decision over the No. 2 Buckeyes, who played without injured Jared Sullinger. Ohio State, whose only loss this season is at Duke, will be tested by a Kansas squad led by Ben McLemore, Jeff Withey and Travis Releford. The Jayhawks? lone defeat this season: vs. Michigan State in Atlanta in the State Farm Champions Classic.

Don?t overlook this game: No. 12 Missouri vs. No. 10 Illinois. These teams first met in St. Louis in 1980 and have played every year in the Gateway City since 1983 in one of the most underrated rivalries in the nation. The Fighting Illini hold a 20-11 edge in the series, but the Tigers have won the last three meetings. And this will be the third season in a row the schools will meet as ranked teams. It doesn?t get much better than this, as the 50-50 crowd split and happy holiday mood in the Scottrade Center makes this a fun and festive event. This also will be Illinois coach John Groce?s first taste of the rivalry, as the Illini seniors don?t want to leave school 0-4  against Mizzou.

Individual matchup to watch: Kansas? Ben McLemore vs. Ohio State?s Deshaun Thomas. They may not match up each trip up and down the court, but this dynamic duo will be fun to watch battle when they lock up. And, it?s safe to say, the winner of this matchup of stars likely will lead their team to victory. McLemore, a 6-5 redshirt freshman, paces the Jayhawks with a 16.3-point average. Thomas, a 6-7 junior, leads the Buckeyes with a Big Ten-best 20.3 scoring average.

Injury update: Northwestern received a big blow when it was announced last week that Drew Crawford was lost for the season with a right shoulder injury. The senior was the team?s second-leading scorer, averaging 13.5 points. Crawford also is No. 10 in the school annals in scoring. The loss of Crawford is a big blow to a Wildcats squad many felt had a good chance to play in the NCAA tourney for the first time. It will be important for players like Dave Sobolewski and Reggie Hearn to step up. Michigan also saw big Jon Horford dislocate a kneecap; he could be out a few weeks, but he?s not a major part of the rotation in Ann Arbor.

Big week: No school has lots of heavy lifting, but let?s go with Ohio State. The Buckeyes play host to Winthrop on Tuesday before welcoming Kansas on Saturday. Yes, Winthrop is just 4-4, but it has been one of the nation?s better mid-major programs in recent years (nine tourney appearances since 1999) and just ended Ohio?s 16-game home winning skein the last time out. And the visit from the Jayhawks will be a good litmus test for the Buckeyes? March Madness mettle.

Stat watch: Is there a better backcourt in the nation than No. 2 Michigan?s trio of Trey Burke, Tim Hardaway Jr. and Nik Stauskas? Maybe not. Burke ranks No. 3 in the Big Ten in scoring (18.0 ppg), while Hardaway is No. 4 (15.7 ppg). Add it up, and the three guys are giving the Wolverines 47 points a game.