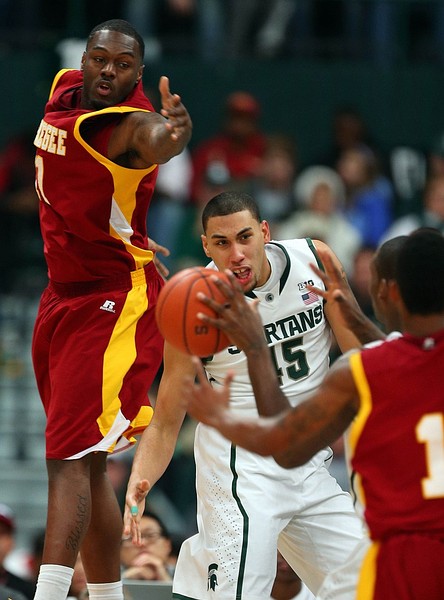 Keith Appling matched a career high with 25 points to lead No. 19 Michigan State to a 92-56 win over Tuskegee on Saturday night at Jenison Field House, where the "Game of Change" was held during the 1963 NCAA tournament.

The Spartans (9-2) played their first game in their former home for hoops since 1989 – a decade after Magic Johnson called it his home court during a championship season – to celebrate a historic event in the same venue nearly a half-century ago.

Calvin Thomas scored 14 and Javier McKinney had 12 points for the Golden Tigers (1-5).

Keith Appling drives for And-1:

FINAL: Keith Appling scored 25 points and grabbed three rebounds and Adreian Payne added 12 points and 10 boards to lead No. 19 Michigan State to a 92-56 victory over Tuskegee on Saturday at Jenison Field House in East Lansing. Michigan State (9-2) went 27-of-32 from the charity stripe as a team (84 percent) and had 18 assists on its 30 baskets for the Spartans. Michigan State was able to secure second chance opportunities, grabbing 17 offensive boards.

HALFTIME: No. 19 Michigan State took full advantage of the combination of Derrick Nix and Keith Appling, ending the first half against Tuskegee up 33-26. Nix scored eight points and grabbed five rebounds, while Appling added 10 points. The Spartans are dominating the rebounding battle so far, with a 23-12 margin. Michigan State didn't trail once in the first half and it also led by as many as 13 points.