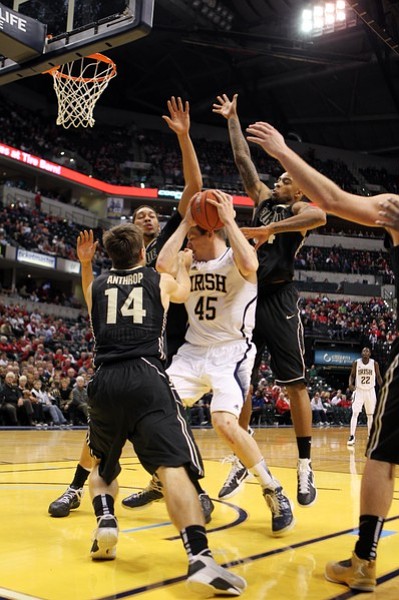 Jack Cooley had 18 points and nine rebounds to lead No. 22 Notre Dame to its seventh straight victory, 81-68 over Purdue on Saturday in the Crossroads Classic.

Eric Atkins had 17 points and seven assists, Pat Connaughton scored 16 and Garrick Sherman 11 for the Fighting Irish (9-1), who have won every game during their win streak by double digits. Former Purdue player Scott Martin chipped in five points for Notre Dame on 2-for-8 shooting.

Purdue freshman Rapheal Davis scored all 21 of his points in the second half, helping the Boilermakers trim a 23-point second-half deficit to single digits at one point. Ronnie Johnson scored 15 points and D.J. Byrd added 13 for Purdue (4-6).

FINAL: Jack Cooley scored 18 points and grabbed nine rebounds and Jerian Grant added nine points and seven boards to lead No. 24 Notre Dame to an 81-68 victory over Purdue on Saturday at Bankers Life Fieldhouse in Indianapolis. Notre Dame (9-1) hit 49 percent of its field goals (26-of-53), shot 24-of-33 from the free throw line and grabbed 15 offensive boards. Rapheal Davis was a bright spot for Purdue (4-6) in the loss with 21 points, three rebounds, and 8-of-9 shooting from the field.

HALFTIME: Jerian Grant has six points to lead No. 24 Notre Dame to a 39-31 lead over Purdue at the end of the first half. The Fighting Irish demonstrated their offensive efficiency by racking up 10 assists on 16 baskets. Seven Notre Dame players have scored. D.J. Byrd leads Purdue scorers with seven points, while Anthony Johnson, Ronnie Johnson and A.J. Hammons all have six points.