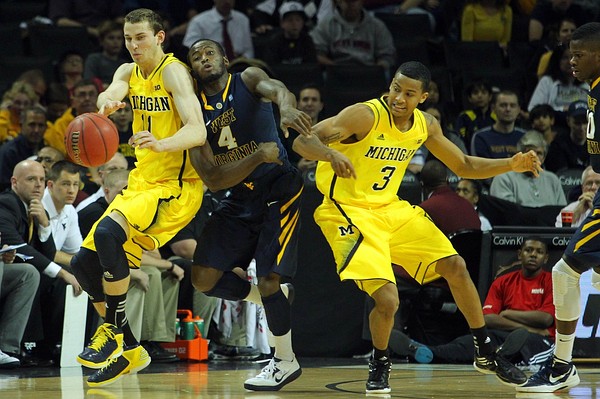 Trey Burke scored a season-best 27 points, Tim Hardaway Jr. matched his season high with 25 and No. 3 Michigan remained unbeaten with an 81-66 victory over West Virginia on Saturday night at the Barclays Center.

The Wolverines (11-0) were last off to this good a start in 1988-89 – the season they won the school's only national championship.

Burke and Hardaway both had solid all-around games in the backcourt. Burke was 12 of 16 from the field and had eight assists, while Hardaway was 7 of 12 and made half of his eight 3-point attempts.

Freshman Terry Henderson had a season-high 23 points for the Mountaineers (4-5), who lost their second straight after a three-game winning streak.

FINAL: Trey Burke scored 27 points, grabbed six rebounds and handed out eight assists as No. 3 Michigan defeated West Virginia 81-66 on Saturday at Barclays Center in Brooklyn. Burke shot 12-of-16 from the field. Hardaway Jr. had 25 points, corralled four rebounds, handed out three assists, and knocked down 7-of-12 shot attempts. The Wolverines shot 56 percent from the field (28-of-50) and still grabbed 12 offensive boards.

HALFTIME: Trey Burke scored 17 points and dished out five assists to lead No. 3 Michigan to a 43-32 halftime advantage over West Virginia. Tim Hardaway Jr. added 10 points for the Wolverines, who had seven players score. Michigan, which didn't trail once in the first 20 minutes, led by as many as 17 points. The Wolverines made 11 of 14 two-point shots in the first half, but shot 5-of-14 from beyond the arc.