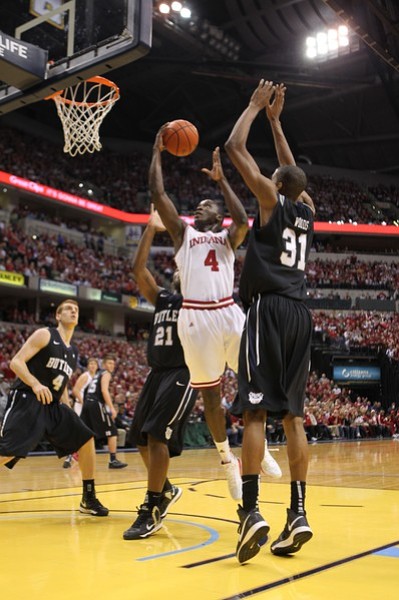 Walk-on Alex Barlow made a spinning 6-foot jumper with 6.1 seconds left in overtime and Butler toppled No. 1 Indiana 88-86 Saturday in the Crossroads Classic. Barlow had scored only 12 points all season. The Bulldogs (8-2) handed the Hoosiers their first loss and beat a top-ranked team for the first time in school history.

The Hoosiers (9-1) were led by Victor Oladipo and Cody Zeller with 18 points each. Indiana had a chance to win it, but Jordan Hulls' half-court heave was off to the left.

Indiana rallied from a 71-64 deficit in the final 2 1/2 minutes to force overtime and led 84-80 with 2:12 to play. The Bulldogs charged back with two 3-pointers and won it with Barlow's short jumper.

Remy Abell drives for And-1:

FINAL: Roosevelt Jones scored 16 points, grabbed 12 rebounds and handed out seven assists as Butler defeated No. 1 Indiana 88-86 in an upset in overtime on Saturday at Bankers Life Fieldhouse. Victor Oladipo contributed 18 points, yanked down three rebounds, dished out four assists, and made 7-of-10 shots from the floor for Indiana (9-1) in a losing effort. The Hoosiers went 27-of-38 from the charity stripe as a team (71 percent).

HALFTIME: No. 1 Indiana leads Butler, 37-33, at halftime despite a big first half from Roosevelt Jones, who scored eight points, grabbed eight rebounds and dished out five assists. Indiana's Victor Oladipo had a big first half, with 10 points and three assists. The Hoosiers applied the pressure in the first half, earning second-chance opportunities with 10 offensive rebounds, and registered nine assists on 14 field goals.