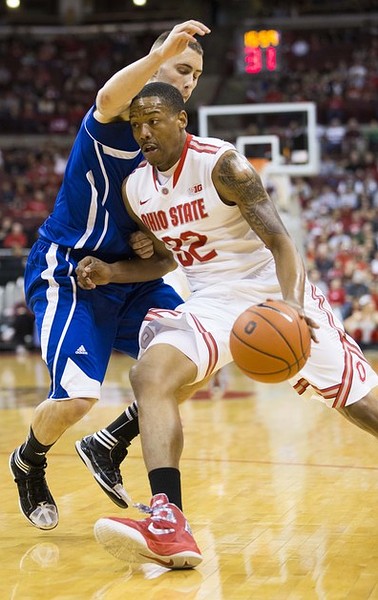 Sam Thompson scored a career-high 18 points and No. 7 Ohio State made the most of an opportunity to get out and run, beating UNC Asheville 90-72 on Saturday.

Deshaun Thomas had 17 points, Lenzelle Smith Jr. 16 and Evan Ravenel tied a career best with 12 points in the first half for the Buckeyes (8-1), who tuned up for a big showdown next Saturday against No. 9 Kansas with the fourth game in an eight-game homestand.

Keith Hornsby, son of Grammy-winning singer and pianist Bruce Hornsby, had a career-high 26 points for Asheville (3-7), which had won its previous two games heading into a tough three-game road trip.

HALFTIME: Evan Ravenel and Lenzelle Smith, Jr. combined to lead No. 7 Ohio to 50-35 halftime lead over UNC Asheville. Ravenel scored 12 points, grabbed seven rebounds, and shot 6-of-7 from the field, while Smith Jr. scored 11 points and shot 5-of-7 from the field. The Buckeyes are dominating the rebounding battle so far, with a 19-12 margin. Ohio State never trailed in the first half and led by as many as 17 points.