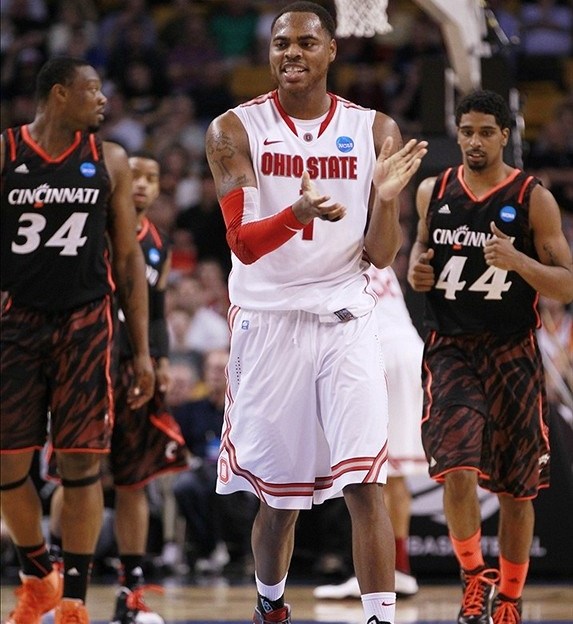 If Ohio State is going to return to the Final Four, Deshaun Thomas knows he must carry a big load. And he embraces that responsibility playing in a loaded Big Ten that most feel is the best conference in America.

So far, so good this season. The No. 7 Buckeyes are off to a 7-1 start, with the lone loss coming at Duke, which is No. 2 in the nation. And Thomas is leading the way with a Big Ten-best 20.8-point average, following a 31-8 mark and regular-season crown in 2011-12 under Thad Matta. I caught up with Thomas as Ohio State prepped for a game this Saturday against  UNC Asheville which airs on BTN/BTN2Go.

Q: What did you work on over the summer to improve at?
A: Handling the ball, coming off pick-and-rolls, coming off screens ? stuff like that. The details of the game. Also, knowing when to put it on the floor when a defender is flying at me, just working on my handle. I also worked on my shot. I want to be able to knock down big shot when we need them.

Q: With Jared Sullinger gone, do you feel like you have had to step up and fill a leadership void?
A: Of course, yes. I was a returning guy off a Final Four team. I had to lead some last year. I learned in a positive way what it takes to reach that goal as a leader and I want to do it again.

Q: What are some things you think the team is doing well and what are some thing it needs to work on?
A: We know we aren?t where we need to be at right now. We have seen a few spurts in practices and games where we look like a heck of a team. One of the things we are doing well is we are trusting in the system. We are playing well as a team. And we are sharing the ball well, too. We just need to take it to another notch. And that?s having the passion and heart for the game.

Q: You considered turning pro after last year. Do you feel you have some unfinished business?
A: Yes. One of my goals is to have a championship season. I want to see our team take that next step. I know there are things I need to get better at in my game. I feel like I have something to prove coming back. I want to show that I can be that guy who will give it his all every night and play with fire and great intensity.

Q: Any young players who have impressed you?
A: LaQuinton Ross has impressed me. He?s a scorer, one of those guys who has the potential to go the next level if he keeps his head in the game, listens to the coaches and plays with intensity. He has caught my eye. He has great potential.

Q: How good is the Big Ten?
A: It is the best conference. It has been that way almost my whole time here. It?s gonna be great, a fun experience, battling those schools. Indiana is No. 1 and has everyone back. Michigan is playing well; Trey Burke is a great player. Everyone is good. Every night, you better be ready to give your all. I feel great about the league. I am ready to compete and have fun.

Q: You are from Ft. Wayne, Ind. Why didn?t you go to Indiana or Purdue?
A: I was the type of guy who wanted to sight see, not be a home guy. I respect home. Don?t get me wrong. It always will be important. I just wanted to get out and see more.

Here are Thomas's stats through eight games this season: