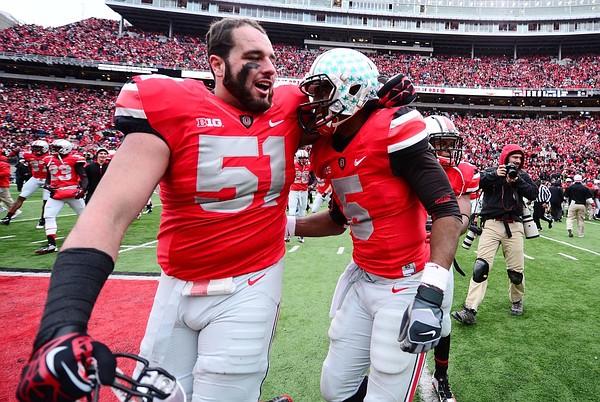 I'm rolling out some quick football season reviews during the lull between the end of football's regular season and the bowl games, and I'm starting with Ohio State. In Urban Meyer?s much-anticipated debut, Ohio State went 12-0 and ranked No. 3 in the AP poll as one of just two FBS unbeatens. It was the sixth unbeaten and untied season in school annals. But, because of NCAA probation, the Buckeyes weren?t eligible to play in the Big Ten title game or a bowl.

Still, it doesn?t diminish what Ohio State did in notching a perfect mark behind an offense with a surprising lack of playmakers and a defense that bled a lot early on before tightening down the stretch.

High point: There were some good ones in a 12-0 season. But let?s go with the capper, a 28-21 season-ending triumph over Michigan in ?The Game.? The Buckeyes used a dominating effort in the second half, rationing the Wolverines 60 yards on 21 plays after halftime. Carlos Hyde fueled the offense with 146 yards rushing.

Low point: The Buckeyes avoided a colossal embarrassment with a 29-22 overtime win at home on Oct. 20 vs. a 3-3 Purdue team that was coming off consecutive blowout losses at home. With Braxton Miller leaving the game late with injury, backup Kenny Guiton came on to engineer a touchdown and game-tying two-point conversion in the final 47 seconds. Ohio State won in overtime to keep the perfect season on track.

Offensive MVP: QB Braxton Miller. The sophomore emerged as the Big Ten?s best player, displaying amazing open-field running skills with an improved arm. Miller is No. 3 in the Big Ten in passing efficiency, hitting 58 percent of his passes for 2,039 yards with 15 touchdowns and six interceptions. He also ran for 1,271 yards and 13 scores, ranking No. 5 in the Big Ten in rushing (105.9 ypg). Add it up, and Miller won the Chicago Tribune?s Silver Football award as Big Ten MVP.

Defensive MVP: E John Simon. Urban Meyer raved about this guy from Day One, marveling at his effort and leadership. His production isn?t bad, either. The senior paced the Big Ten in sacks with nine and was second in tackles for loss with 14, as the Buckeyes had the No. 2 rush defense in the conference (116.1 ypg).