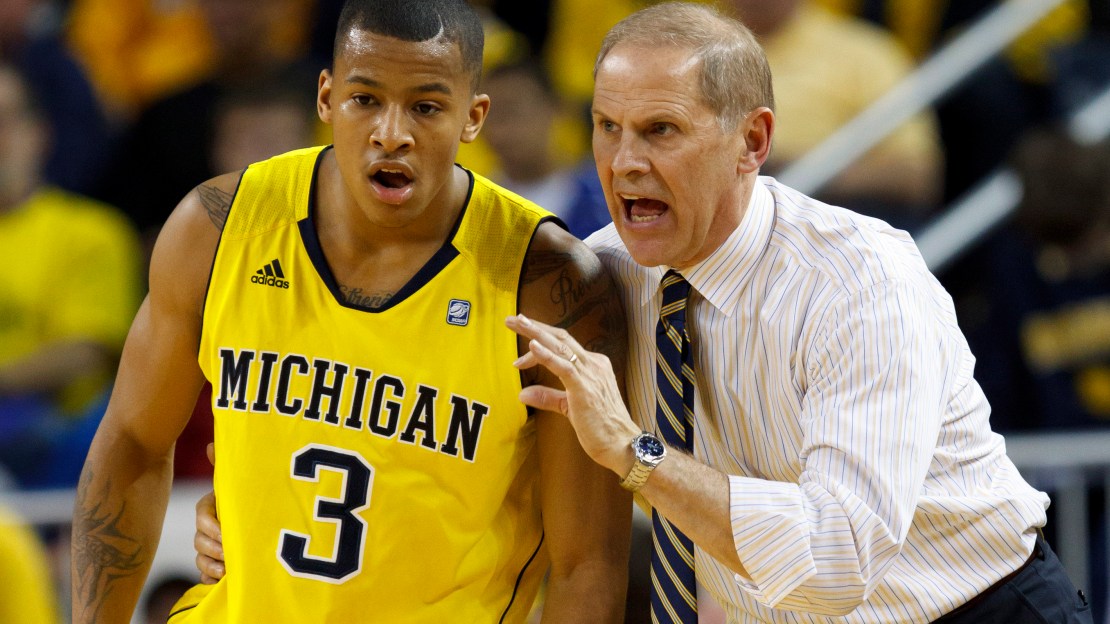 Ever wonder why John Beilein left West Virginia for Michigan? Well, it?s all right here in this story by Nick Baumgardner of MLive.com.Baumgardner also tells you why Beilein is not leaving Michigan. "I love rebuilding programs, (I wanted to) do one more," Beilein said. "And the University of Michigan ended up being that choice." It's one of my many links today.

Here's a tale for the "Just Plain Weird" file: Dustin Hockensmith of the Harrisburg Patriot-News chronicles a confrontation between Franco Harris-yes, THAT Franco Harris–and NCAA prez Mark Emmert. Apparently, Franco still is mad as heck about the sanctions Emmert smacked Penn State with-and he isn?t gonna take it. The confrontation got the point where the cops were called and Emmert had to bolt out a back door. Harris has to dial it down a notch or two.

Ever see the ?Twilight Zone? episode on Iowa running backs? You know, the one about how they keep disappearing or getting hurt? Of course, I kid, but it could be true. The latest ?tale from another dimension? concerning a Hawkeye running back: Greg Garmon is leaving Iowa.

Garmon, who joins Mika?il McCall, Marcus Coker and De?Andre Johnson to bolt Iowa City in 2012, told the Cedar Rapids Gazette that ?it wasn?t clicking for him at Iowa.? Fair enough, but he did show some promise as a true freshman last fall. But, he won?t be missed. At least not that much. Remember: juniors Mark Weisman and Damon Bullock will be back. And sophomore Jordan Canzeri and redshirt freshman Barkley Hill also will return. See, it isn?t so bad, Hawkeye fans.

The Nebraska coaching staff took a small hit when G.A. Vince Marrow took a spot on the Kentucky staff as tight ends coach for childhood buddy Mark Stoops. Hard to blame him. Heck, Bo even recommended Marrow for the post.

Speaking of Nebraska, its rushing attack may test a Georgia run defense that allowed 350 yards rushing to Alabama in the SEC title game.

?It's not just one guy. That's kind of the thing that concerns you a little bit,? Georgia coach Mark Richt told the Omaha World-Herald. ?They can run inside, outside. They've got power, they've got spread. And they've got a quarterback who can create on plays that are designed to be a pass.?

It?s all true. This is, too: Nebraska HAS to run well-or it has no shot vs. the Bulldogs in the Capital One Bowl.

More Nebraska ? there is much buzz about the school?s new Pinnacle Bank Arena, which will open next season. But who will be the first foe? The school wants to have an opponent by the end of March. How about play a Big Ten game against, say, Iowa?

Michigan State has had just three basketball coaches since 1969. No Big Ten school-nor any other nationally prominent school–has been as stable.

Gus Ganakas (1969-76); Jud Heathcote (1976-95); Tom Izzo (1995-present) are the holy trinity at Michigan State, helping make this one of the nation?s top programs. In that time, Joe Rexrode of the Detroit Free Press notes, Kentucky has had seven coaches, Duke has had five, Kansas and North Carolina each have had four. UCLA? Nine, including John Wooden. Indiana has had five coaches since 1969, and Michigan and Ohio State each have had six.

Have you noticed Illinois? shiny 11-0 record and No. 10 ranking? It sure is a far cry from the heap the Fighting Illini were in at the end of last season. That?s why Mark Tupper of the Decatur Herald says Illinois has come a long way. But concerns loom.

Among them? Illinois shoots too many three-points, has weak post play, clanks free throws and hasn?t dominated nondescript foes at home. Are these things nit-picking? Too early to tell. Stay tuned.

Nice read here on Al Borges, whose off-field job as father is more important than his on-field job as Michigan offensive coordinator.

Tim Miles, on facing Nebraska native Dana Altman on Saturday at Oregon: ?I?m going to take him some Runzas and try to soften him up early.?

My take: Anyone who has had a Runza knows what Miles is talking about. I do. Delicious.

My take: Smith is impressive. Just wait until he has another season under his belt. And Nittany Lions offensive line coach Mac McWhorter is doing a good job grooming him, too.

Notre Dame-Michigan is only appropriate under the lights at the Big House. Central Michigan-Michigan just wouldn't have the same oomph.

My take: Exactly. Prime time for a prime-time matchup.

BTN's Shon Morris called #Gophers under the radar. Said "this is a team to watch out for" when everybody is talking IND, OSU, MICH and MSU.