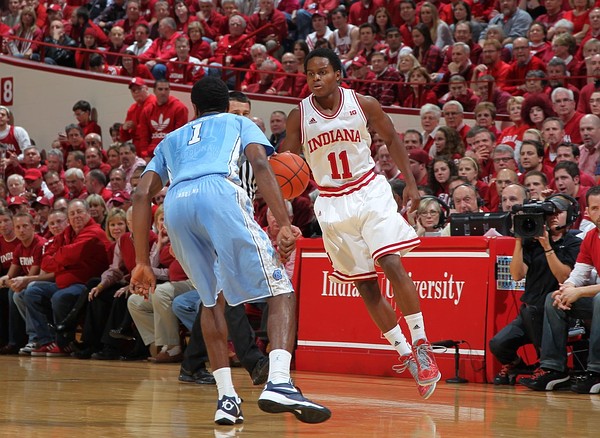 As we finish up non-conference play, we?re getting a better picture of where the teams stack up, and where they have holes to fill. No team is perfect, so everyone could stand to benefit from some gifts from Santa (or whoever). Here?s a rundown of what everyone needs.

Illinois (11-0)
Illinois? fast start has been powered by its hot outside shooting. Not only are the Illini making a lot of 3s (39.6 percent), but over 40 percent of their attempts have come from three-point range. That?s good for the 11 wins John Groce?s team has banked, but can the Illini expect to keep this up all season?

Probably not. The last high-major 40/40 team was Notre Dame?s 2005-06 team, which shot 40.3 percent from three, while dedicating 41.6 percent of its attempts from behind the arc. That same season, Indiana shot 39.5 percent from three while also attempting over 40 percent of its shots from there as well. But before you take that as a sign that it can be done, keep in mind that the three-point line was moved a foot further back for the 2008-09 season. Since that move, not only has the accuracy decreased, but the frequency of threes has decreased as well. 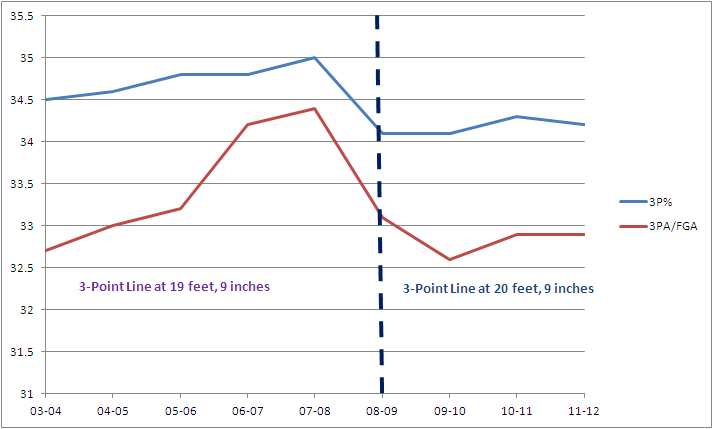 The takeaway is that since the rule change, shooting three-pointers has been a more adventurous proposition. And it?s easy to predict that the Illini?s hot shooting will not continue-either the team will start shooting fewer threes, or it will make fewer of the threes that it attempts (or both).

Which means that Illinois needs to improve elsewhere in order to make up for the impending perimeter regression. In a perfect world, Illinois gets itself an R2D2. That is, Illinois could really use a big man that rebounds on both ends, dunks, and defends. Unfortunately, as of this moment Illinois? frontline consists of a pair of centers that are shooting a combined 44 percent from two-point range, and are both mediocre defensive rebounders. A big man that could simply put the bunnies away and clean up the defensive glass would do wonders for this team.

Indiana (9-0)
To put it mildly, this is a thankless task. If I write ?nothing,? then the feedback will be that we?re ignoring the Hoosiers. If I offer a suggestion, then it?s ignorance of the fact that Indiana really doesn?t need much. This is the team with the best offense and the 7th-best adjusted defense in the country, after all. But I?ll take the latter road because hey, even rich kids get Christmas presents. But what do you give the guy who has everything?

When I look at this roster, and wonder how Big Ten teams will prepare to stop the Hoosier offense, the only strategy that seems sensible to me is to simply play 4 on 5. While just about everyone else in the lineup is lethal, Indiana?s freshman, Yogi Ferrell, is not much of a scoring risk. To his credit, the young floor general realizes he?s surrounded by NBA talent, and prefers to set his teammates up, which he does well enough. But I think when we get into conference play, we?ll see teams aggressively help off of Ferrell to double team Cody Zeller or sag into the lane to prevent Victor Oladipo?s drives to the basket. After all, despite being very selective with his shots, Ferrell is only making 33 percent of his twos, and is just 1 for 10 from three. With the Hoosiers, it?s all about picking your poison, and I suspect that teams will gladly drink the Ferrell punch.

So if Ferrell?s jumpshooting were to improve, opposing defenses would have nowhere to hide.

Iowa (8-2)
Last season Iowa?s offense suffered from a lack of interior scoring, and its defense was similarly challenged with guarding opponents inside the arc as well as rebounding any misses. This year, the finishing ability of the Hawkeyes seems much-improved, and the disruption of opponent shots has also increased. A large part of the credit for these two events surely belongs to freshman Adam Woodbury, who is having a fine start to his collegiate career. He?s making 64 percent of his chances inside the arc, and he?s also blocking a fair number of shots.

But Iowa?s defensive rebounding remains a problem. This is despite the fact that Woodbury is a plus defensive rebounder. However, his teammates Aaron White and Melsahn Basabe have lost some effectiveness on the defensive glass over the offseason, so it seems. But the more likely explanation is that Woodbury is simply gobbling up boards that his teammates would previously grab. The net result is that Iowa?s rebounding hasn?t really improved. What the Hawkeyes need is a commitment to the glass. Basabe and White clearly have the ability to rebound better, but until that actually happens, Iowa?s defense will likely hold back what promises to be an above-average offense.

Michigan (10-0)
One might be tempted to look at Michigan?s early tempo-free numbers and conclude that the Wolverines? problems lie on defense, especially its permissive attitude toward turnovers. But the same could have been said about Michigan last season at this point, and all that team did was force more turnovers than anyone else in the Big Ten. What Michigan hasn?t done under Beilein, however, is rebound on defense: 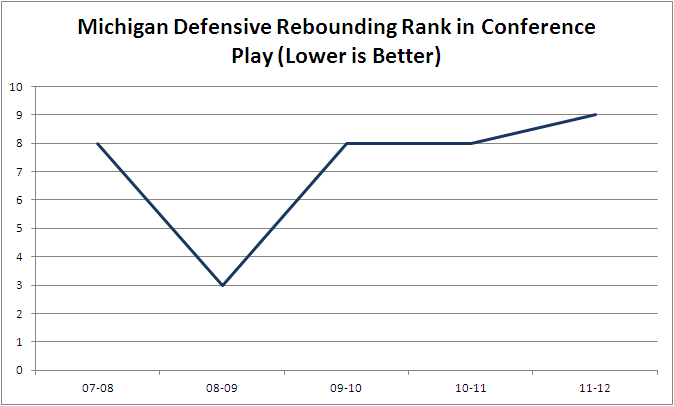 I?m going to go out on a limb and guess that defensive rebounding will again be a struggle for Michigan in Big Ten play. And yes, this limb is pretty far out, as Michigan is currently the 4th-best defensive rebounding team in the nation. Indeed, none of those previous UM teams featured Mitch McGary, who appears to be the best rebounder that?s ever played under Beilein. Fair enough. But the young man has an alarming turnover rate against the softest part of Michigan?s schedule (while the Wolverines have challenged themselves, no one has a non-conference schedule that?s as robust as the Big Ten season), so it?s an open question whether he?ll continue to get as much playing time against conference foes. So for Michigan, that would be its wish-McGary lowers his turnover rate to ?tolerable,? allowing him to stay on the floor to grab defensive boards.

Michigan State (8-2)
I suspect that if the three-point line were abolished tomorrow, Tom Izzo wouldn?t lose much sleep. His Spartans typically eschew attempting three-pointers, preferring instead to pound the ball inside and relentlessly attack the offensive glass. 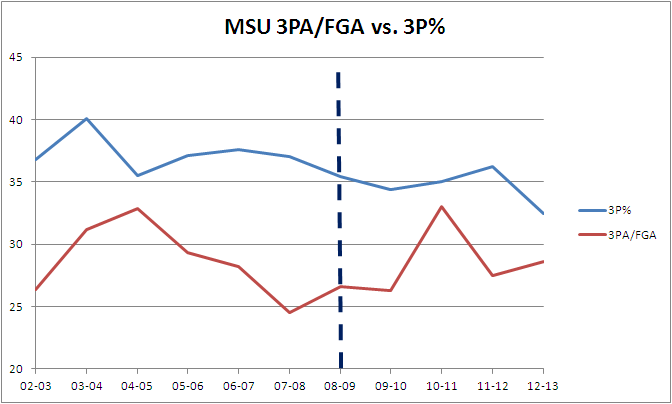 The usual case is that these lines go in opposite directions, meaning that as more three pointers are shot, fewer or made (as well as vice-versa). When they both go in the same direction it can be either good (if they both go up) or bad (if they both go down). The average 3PA/FGA since the 2002-03 season is 28.6-which happens to be exactly the rate the Spartans are shooting threes this season. But the accuracy is at an all-time low.

Sure, turnovers are a problem. While MSU typically has an unsettling number of turnovers, this year?s figure is at the upper end of the spectrum. But I think it?s more likely that those even out than it is Michigan State suddenly starts making its three-pointers. Moreover, these two things might be in tension. Teams that shoot a high number of threes, in general, commit fewer turnovers than those that prefer to shoot from inside the arc. Thus, MSU?s lack of three-point shooting takes away one possible remedy to Izzo?s turnover problem. The good news is that freshman Gary Harris has been making his threes since coming back from injury, so Michigan State might already have received its holiday gift.

Minnesota (11-1)
You know that one guy on your list, who just loves buying things at that one store? He?s the easiest person to shop for, because he always wants the same thing. Well, that?s Minnesota. Every year, the Gophers are mediocre defensive rebounders. And despite the fact that this team has a nearly-healthy Trevor Mbakwe, as well as one of the most formidable and athletic front lines in the Big Ten, they?re again terrible at rebounding on defense. It?s actually at an all-time low under Tubby, as Minnesota ranks 299th in the nation in defensive rebounding. Even more of a head-scratcher is the fact that Minnesota is the best offensive rebounding team nationally.

Thus, I think the Gophers need an attitude adjustment more than anything else. They already have one of the best rebounders in the country in Mbakwe, and they clearly have the athletes to go up and get rebounds. It?s a matter of dedication. Maybe one place to look is with blocked shots. Every season Minnesota rates as one of the best shotblocking teams in the country, which might explain some of the rebounding difficulties. By attempting to swat so many shots, Minnesota?s frontline probably ends up out of position on rebounds. Yes, shotblocking has its merits, but rebounding is probably more important. So for this holiday season, Minnesota needs to stay grounded.