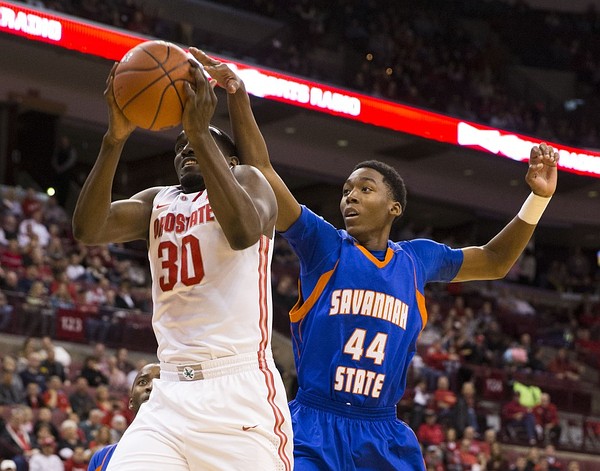 Deshaun Thomas scored all but one of his 22 points in the first half and No. 7 Ohio State showed its firepower inside and out in beating Savannah State 85-45 on Wednesday night. LaQuinton Ross added 13 points, Shannon Scott had 12 and Evan Ravenel 11 for the Buckeyes (7-1), who are three games into an eight-game homestand that will carry them all the way through the Big Ten opener against Nebraska on Jan. 2.

The Tigers came in relying on their stingy defense. They were allowing only 53.0 points a game, with their opponents shooting 37.1 percent from the field.

FINAL: Deshaun Thomas scored 22 points and grabbed seven rebounds and LaQuinton Ross added 13 points and nine boards to lead No. 7 Ohio State to an 85-45 victory over Savannah State on Wednesday at Value City Arena. Ohio State (7-1) shot 47 percent from the field (28-of-60), including  50 percent from downtown (10-of-20) . Ohio State crashed the offensive glass effectively, grabbing 25 offensive boards. The Buckeyes held Savannah State (5-5) to 38 percent shooting from the field and grabbed 29 defensive rebounds, while only allowing nine offensive rebounds.