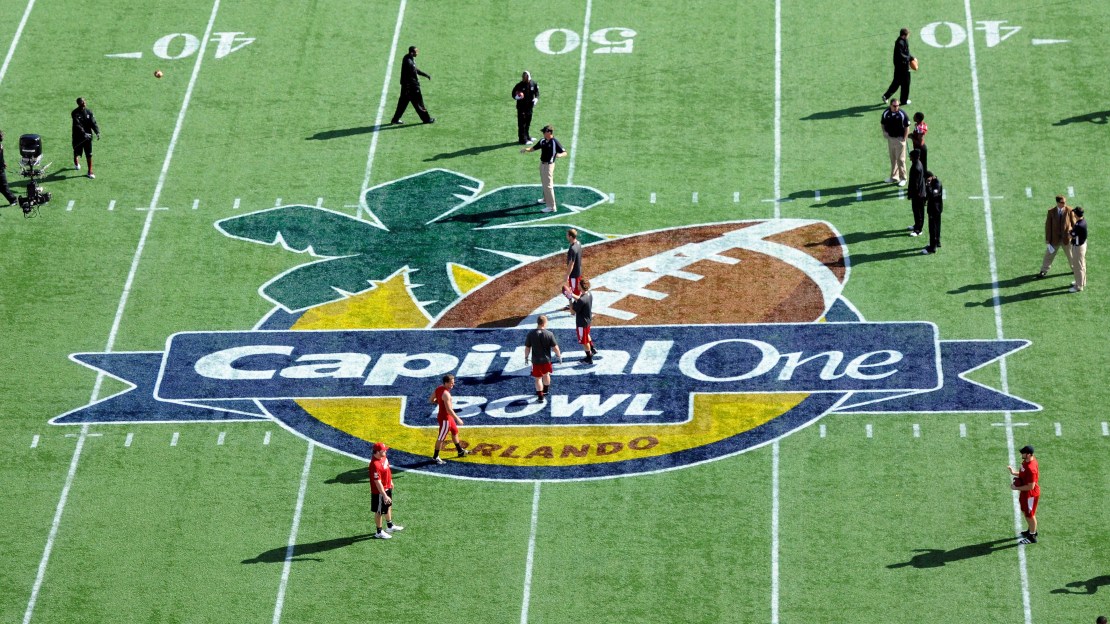 There are seven Big Ten teams in bowl games. And there would be two more, if not for Ohio State and Penn State being on probation. What's the best quarterback duel? Wheres' the best chance for an upset? Which game is the best candidate for a good, old shootout?

Here?s a look at the best of the best involving the Big Ten and bowls games.

Best game: The Rose Bowl clash between Stanford and Wisconsin will be like looking in the mirror. Each school has a tough, physical, punch-you-in-the-nose offense along with an underrated defense. Not having Bret Bielema along for the ride won?t impact the Badgers much, as he didn't call anything. But the Wisconsin quarterback situation will be interesting. Curt Phillips figures to start, but how much will Joel Stave play coming off a broken collarbone?

Best chance for a shootout: The Purdue-Oklahoma State clash in the Heart of Dallas Bowl could be a back-and-forth affair, as neither team has a great defense while featuring offenses that can explode. The Cowboys rank No. 6 in the Big 12 (426.3 ypg) and have scored at least 31 points in each of the last seven games. The Boilermakers are No. 11 in the Big Ten in defense (407.3 ypg) and have scored over 50 points three times and 48 another time in 2012.

[ BOWL SCHEDULE: Bookmark a full listing of all bowl games. ]

Best chance for an upset: Michigan State has a good chance to knock off a TCU squad is very much like itself-good defense, struggling offense. Bottom line: This figures to be a low-scoring game that features lots of defense. This game should be played in black and white. Get out your leather helmet!

Best setting: It doesn?t get any better than the Rose Bowl. The iconic edifice is tucked in a stately neighborhood amid rolling hills with the San Gabriel Mountains serving as a picturesque backdrop. The Buffalo Wild Wings Bowl gets mention, as downtown Tempe is a hopping place within walking distance of Sun Devil Stadium. If you can?t have fun on Mill Avenue, then you have a problem.

Best bowl with an interim head coach: Pick one, as there will be three Big Ten bowls with interim head coaches. Purdue will be led by Patrick Higgins vs. Oklahoma State after Danny Hope was fired; Texas Tech will be coached by Chris Thomsen in the Meineke Car Care Bowl vs. Minnesota after Tommy Tuberville bolted for Cincinnati; Barry Alvarez is stepping down from his A.D. office to lead Wisconsin vs. Stanford in the Rose Bowl after Bret Bielema hightailed it for Arkansas.

Best opponent: Nebraska will face an 11-2 Georgia team that ranks No. 6 in the AP poll and No. 7 in the BCS standings. The Bulldogs came so close to beating Alabama in the SEC title game and playing for the national title vs. Notre Dame. No doubt, the Cornhuskers will have their hands full against Mark Richt?s crew.

Best bowl rematch: Take your pick, as there are four of them. Nebraska and Georgia met in the 1969 Sun Bowl; Purdue and Oklahoma State met in the 1997 Alamo Bowl; Wisconsin and Stanford met in the Rose Bowl after the 1999 season; Minnesota and Texas Tech met in the Insight Bowl in 2006.

Player on the spot: Michigan State figures to have little chance to topple TCU unless running back Le?Veon Bell has a big game. The junior leads the nation with 350 carries, and he paces the Big Ten in rushing (137.3 ypg). As he goes, so goes Michigan State. It really is that simple.

Best individual matchup: Across the entire bowl landscape, there may not be a better one-on-one matchup than Michigan offensive tackle Taylor Lewan vs. South Carolina defensive end Jadeveon Clowney. Each is an All-American and likely future first-round NFL draft choice. Put down that cup of egg nog and watch this.

Best quarterback battle: This is an easy one-it?s Nebraska?s Taylor Martinez vs. Georgia?s Aaron Murray in the Capital One Bowl. In fact, there isn?t another quarterback matchup in a Big Ten bowl that even comes close. Martinez is the ultimate dual-threat signal-caller who is No. 1 in the Big Ten in passing efficiency. Murray is more of a classic passer who some think-including ex-Colt coach Tony Dungy-will be the first quarterback taken in the NFL draft if the junior opts to come out.

Best coaching matchup: It will be a delight to watch Michigan State?s Mark Dantonio match wits with TCU?s Gary Patterson in the Buffalo Wild Wings Bowl. Each is a defensive mastermind who has built tough, hard-nosed disciplined team in their own mold. Woody Hayes would be proud.

Best coordinator matchup: Nebraska offensive coordinator Tim Beck vs. George defensive coordinator Todd Grantham. Beck pushes the buttons on the No. 1 offense in the Big Ten, as the Cornhuskers average 462.2 yards. Nebraska also is No. 2 in the league in scoring with a 35.1-point average. The Georgia defense is No. 6 overall in the SEC (351.2 ypg), ranking No. 2 vs. the pass (173.5 ypg) and No. 12 vs. the run (177.8 ypg). Jarvis Jones may be the top linebacker in America. Grantham has an extensive NFL, having served as defensive coordinator for the Browns and on the Cowboys staff.

Agree with my choices above or disagree? You tell me.