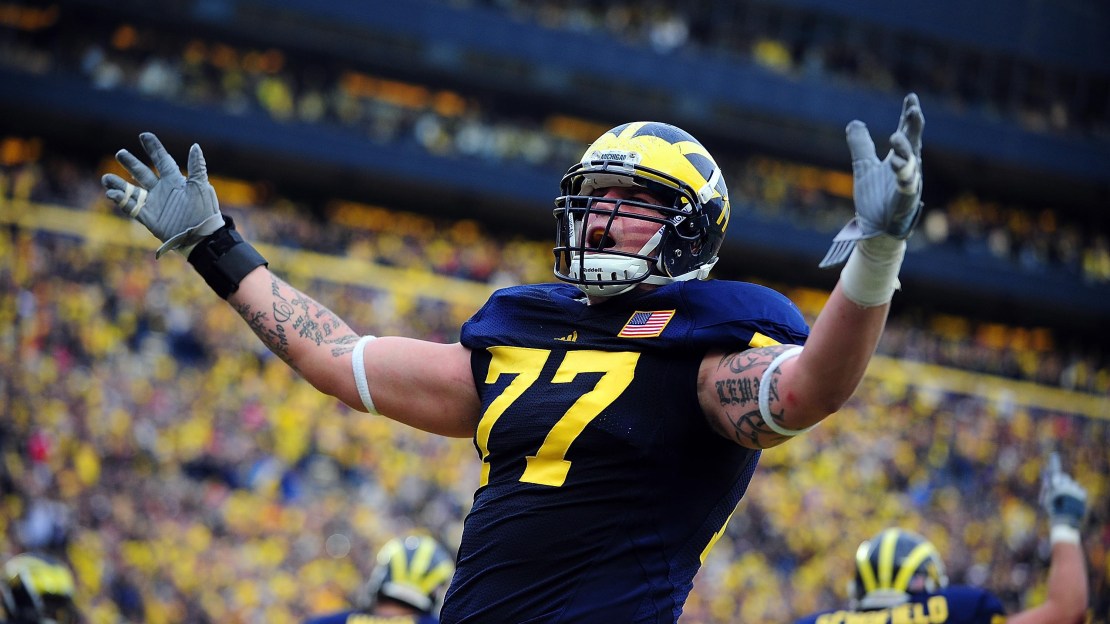 It?s getting cold outside across the Big Ten, but you?ll find plenty to warm you up in my daily links, beginning with one of the hottest individual matchups in the bowl season pitting Michigan offensive tackle Taylor Lewan and South Carolina defensive end Jadeveon Clowney. This is Coke vs. Pepsi, Balboa vs. Lang, Coyote vs. Roadrunner big. I can?t wait.

Each is an All-American and a likely first-round draft choice when they come out. Clowney even has some hardware from 2012, winning the Hendricks Award as the nation?s top defensive end. Bottom line: This is great theatre, a clash of two titans. Don?t miss it. Books will be written about this. Well, not really. But this is something you can tell your children about.

[RELATED: Take the Big Ten's quick survey on the impact of conference expansion. ]

It was no shock that Ohio State defensive lineman Johathan Hankins turned pro, meaning the Buckeyes must replace all four starters up front (John Simon, Nathan Williams and Garrett Goebel are the others). Doug Lesmerises of the Cleveland Plain Dealer thinks the big fella could be the highest selected Buckeye since cornerback Malcolm Jenkins went No. 14 in 2009.

Roby is a redshirt sophomore, having played just two seasons. But the guy is good-really good. However, most project him as a second-round pick. Still, it Roby bolts, Ohio State would have eight starters to replace on defense. Either, spring football in Columbus will have plenty of storylines.

The great Charley Walters of the St. Paul Pioneer-Press says Minnesota is winning behind a new-look Tubby Smith. Check out the ?stache.

Smith grew it to promote prostate cancer awareness in November. But it?s December. And it?s under Smith?s nose. Why? Perhaps it?s superstition, as the Golden Gophers are playing goldenly with a 10-1 mark and No. 13 ranking.

Iowa?s lack of playmakers at receiver was well-documented. (Where are you, Marvin McNutt?). But, have no fear: The Hawkeyes have reeled in a JC wideout in Damond Powell, a 5-11, 175-pound speedster who has been timed at 4.39 in the 40. (I know, I know ?)

Now, who will throw him the ball?

We all were shocked by Bret Bielema bolting for the Arkansas job. Even the jaw of A.D. Barry Alvarez hit the floor. That?s why the next Badger coach will have to tell Big Barry if another school comes after him.

This sounds good in theory. But ?

Anyone who saw the Michigan State offense knows it needs some type of change. Well, it?s coming.

No, the Spartan offense won?t change its basic foundation and start running the Mike Leach offense. But, among other things, we may see more designed quarterback runs for an attack that was 10th in the Big Ten in scoring (20.2 ppg) in 2012.

Harrisburg Patriot-News writer David Jones is keeping an eye on the Wisconsin job. Why? Because he says it?s a big hire for Penn State, too, as the schools are Leaders Division rivals.

With a bad hire, all the greatness that Wisconsin has attained could be undone-just like that, as there aren?t a lot of inherent advantages for a program that basically slumbered from 1963-1992. Jones says Wisconsin A.D. Barry Alvarez doesn?t need a home run hire-rather, the right guy for a unique program.

The great Loren Tate of the Champaign News-Gazette says the Illini are moving up the Big Ten pecking order.

I?m not gonna argue with Tate. He?s correct, anyhow. Just look at the work of new coach John Groce, whose team is thriving behind sweet 3-point shooting and a variety of defensive looks. This team is 10-0. But, I will remind the denizens of "Chambana" that Illinois also was 10-0 last year. Whatever happened to Bruce What?s-his-name?

Speaking of Illinois? hoops, they have a prominent part in the Big Ten notebook of Brian Rosenthal of the Lincoln Journal-Star.

Another exciting nugget in there: Indiana freshman big men Hanner Mosquera-Perea and Peter Jurkin will make their debuts in Saturday?s neutral-site game with Butler. The two had been suspended nine games by the NCAA for violating amateurism rules. Like the Hoosiers need more studs for the end of the bench.

The Big Ten isn?t favored to win any of its seven bowl games. Not one! In fact, the Big Ten is a double-digit underdog in a few of the matchups-including Nebraska vs. Georgia in the Capital One Bowl.

But don?t count out the Huskers, says the great Jon Nyatawa of the Omaha World-Herald. Nyatawa cites data that shows that since the 1998 season, 16 of the 53 teams favored by 10 points or more in their bowl game have lost. It's happened twice in national title games: Ohio State's Fiesta Bowl win over Miami after the 2002 season and Oklahoma's upset over Florida State in the Orange Bowl after the 2000 season.

And who?s gonna argue with history? Not me.

Ryan Evans just talked to a group of us about his FT struggles. He was honest, funny, insightful. Just a great interview.

My take: When you are going through a slump, you need a sense of humor. It sure doesn?t hurt.

Jordan Hill accepted an invitation to play in the Senior Bowl. Game is Jan. 26 in Mobile, Ala. Hill's knee will def. be 100 percent by then.

My take: The guy is a flat-out stud.

My take: This speaks to the offensive skill talent in this loaded conference.

MSU announces it has sold just 2,000 tickets to the Buffalo Wild Wings Bowl.

My take: Can?t say I?m shocked. But, heck, just getting out of Michigan for a few days and heading to Arizona should make going to this bowl worthwhile.