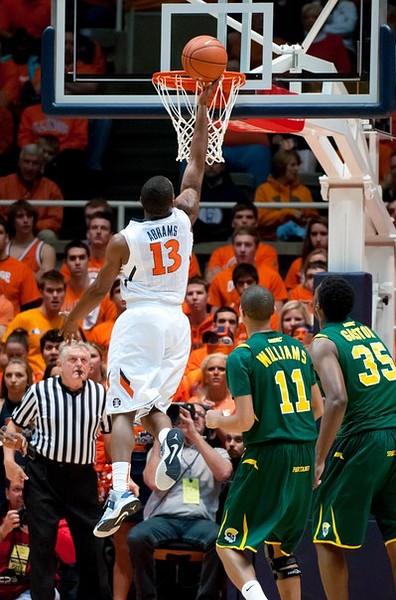 The Illini (11-0) were coming of a win at Gonzaga on Saturday that helped move them into the top 10, but were sluggish against the Spartans. Illinois was shooting 46 percent from the field coming in but shot just 35 percent on the night.

Rashid Gaston scored 12 points and Pendarvis Williams added 11 for Norfolk State (6-6), which led for much of the first half.

Richardson left late in the first half with a badly bruised shoulder but returned.

FINAL: No. 10 Illinois went into the locker room with the momentum and came out of the second half flying as well en route to a 64-54 victory over Norfolk State on Tuesday at Assembly Hall. Illinois (11-0) trailed 24-19 with 4:36 to go in the first half, but went on a 20-5 run over the next 6:24 to take a 10-point lead. Rashid Gaston was a bright spot for Norfolk State (6-6) in the loss with 12 points, eight rebounds, and 5-of-9 shooting from the field. Brandon Paul sparked the Fighting Illini, as he scored 14 points and hauled in eight rebounds in the victory.

HALFTIME: No. 10 Illinois trailed early, but it leads Norfolk, 32-29, after a first half that featured five lead changes. Brandon Paul, fresh off his 35-point game at Gonzaga, scored 10 points and grabbed three rebounds to lead the undefeated Illini. Sam McLaurin and D.J. Richardson both added four points for a balanced Illini attack that featured nine scorers. Norfolk's Pendarvis Williams already has 11 points and four rebounds.