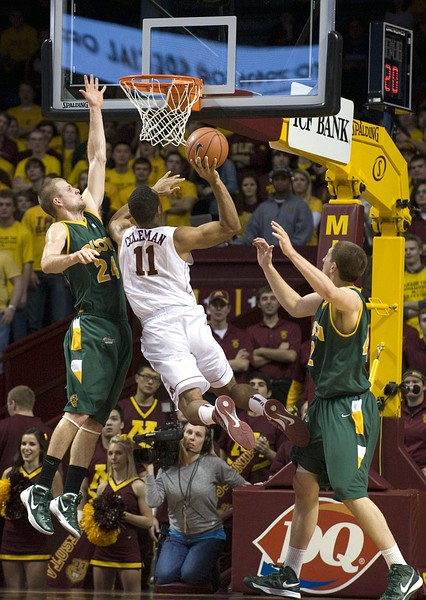 Rodney Williams scored a season-high 19 points, including a 360-degree dunk off a fast break, and Trevor Mbakwe grabbed a career-high 18 rebounds to lead 13th-ranked Minnesota past North Dakota State 70-57 on Tuesday night.

[RELATED: Did You See This? Rodney Williams 360 dunk]

Lawrence Alexander led the Bison (8-3) with 19 points, Taylor Braun added 15 and Marshall Bjorklund pitched in 12. Braun, who won two of the last three Summit League Player of the Week awards, fouled out with 3:57 left on a pump-fake power move by Mbakwe for a layup and three-point play.

FINAL: Trevor Mbakwe scored 14 points and grabbed 18 rebounds to lift No. 16 Minnesota to a 70-57 win over North Dakota State on Tuesday at Williams Arena. Rodney Williams Jr. also had a big game for the Gophers (11-1), going for 19 points and six rebounds. After going into the break with momentum, the Golden Gophers kept their foot on the gas to start the second half. Minnesota led 29-26 with 1:46 left in the first half before it widened the margin to 19 points with a 22-6 run that ended midway through the second half.

HALFTIME: Rodney Williams Jr. and Trevor Mbakwe have teamed up to give No. 16 Minnesota a 37-26 lead over North Dakota State. Williams Jr. scored 13 points, grabbed five rebounds, and shot 5-of-9 from the field, while Mbakwe scored three points and grabbed nine rebounds. The Golden Gophers led 29-26 before they went on a 8-0 run to close the half. The Golden Gophers hit six threes in the first half, shooting 46 percent from deep. Minnesota distributed the ball well, with eight assists on 13 field goals in the first half.