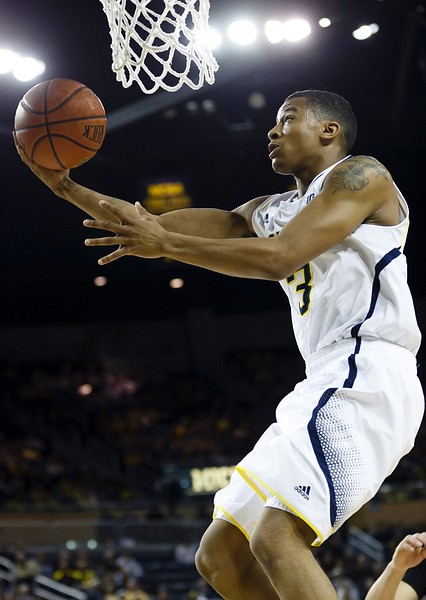 Trey Burke scored 19 points and freshman Nik Stauskas added 12 to lead No. 3 Michigan to a 67-39 victory over Binghamton on Tuesday night. The Wolverines (10-0) are off to their best start since their national title season of 1988-89.

This win was every bit the mismatch it looked like before the opening tip. The Bearcats (2-9) were coming off a 22-point loss to Bryant. They led Michigan 10-8 before the Wolverines went on a 19-2 run.

Jordan Reed scored 11 points and was Binghamton's only player in double figures.

FINAL: No. 3 Michigan's defense shut down Binghamton, as the Wolverines defeated the Bearcats 67-39 on Tuesday at Crisler Center in Ann Arbor. Michigan (10-0) held Binghamton (2-9) to 34 percent shooting from the field. Trey Burke picked up the offensive burden for the Wolverines, finishing with 19 points, four rebounds, five assists, and 8-of-12 shooting from the field.

HALFTIME: No. 3 Michigan took full advantage of the stellar combination of Glenn Robinson III and Trey Burke, ending the first half against Binghamton up 34-14. Robinson III scored six points, grabbed five rebounds, and shot 3-of-3 from the field, while Burke scored 10 points and shot 4-of-5. The Wolverines, who held the Bearcats to 27 percent shooting, were trailing 10-8 before going on a 26-4 run to take the lead late in the half. Michigan moved the ball in the first half, accounting for eight assists on 13 field goals.