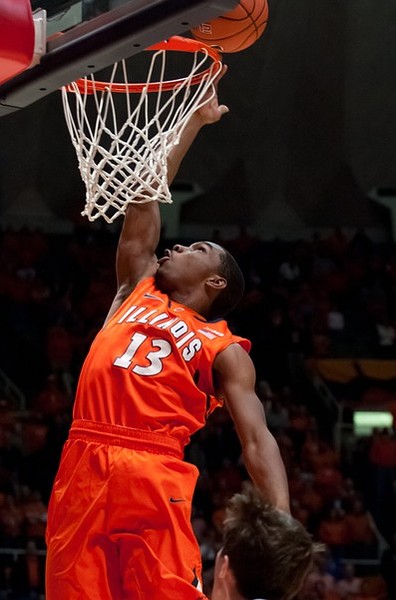 It?s a new season. So, it?s time for a new feature. Welcome to the ?Super Seven.? Each week, I will look at different aspect of Big Ten basketball-and rank it from 1-7. The seven best coaches, seven best arenas, seven best shooters, etc. To kick things off, I?m looking at the seven most impressive starts to the season.

1. Illinois. What a difference a new coach has made. John Groce arrived from Ohio and has the Fighting Illini off to a 10-0 start, which is among the most surprising beginnings of any team in the nation. Brandon Paul is playing like an All-American for a team that is shooting well from 3-point range. That?s why Illinois has scored triumphs over schools like USC, Butler, Georgia Tech and Gonzaga. Can?t wait for the ?Braggin? Rights? game vs. Missouri in St. Louis on Dec. 22. What if Meyers Leonard was still around?

2. Michigan. It doesn?t get much better than 9-0, which is the Wolverines? best start since that magical 1988-89 national championship season. And Michigan has whipped several name-brand schools, including Pitt, Kansas State, N.C. State and Arkansas. A win over West Virginia on Saturday only will add to this impressive beginning for a team with strong veterans like Tim Hardaway Jr., Trey Burke and Jordan Morgan and stud newcomers like Glenn Robinson III and Nik Stauskas.

3. Indiana. At 9-0 and ranked No. 1 in the nation, the Hoosiers are fulfilling the massive expectations that they brought into the season as the nation?s top team. But who have they beaten? The top wins have been vs. Georgetown and North Carolina. Pesky Butler looms Saturday. But that?s it, as this non-conference slate has lacked teeth. (Too bad that Kentucky series couldn?t have continued.). Cody Zeller looks like the national player of the year and future No. 1 overall draft choice. Victor Oladipo, Christian Watford, Will Sheehey and Jordan Hulls help round out a cast that doesn?t figure to be severely tested until a trip to Ohio State on Feb. 10, though a trip to Illinois the game before the stop in Columbus could be daunting.

4. Minnesota. The Golden Gophers are delivering on their ample promise, pushing out to a 10-1 start that saw Tubby Smith notch career win No. 500 the last time out. Like Ohio State, Minnesota?s lone loss was to No. 2 Duke. And there are victories vs. the likes of Richmond, Memphis, Stanford, Florida State and USC. This team has young talent, in Andre Hollins, Austin Hollins and Joe Coleman, and veteran talent, in Rodney Williams and Trevor Mbakwe. Fear the Gophers!

5. Ohio State. The lone blemish on the Buckeyes? resume is a 73-68 loss at Duke. And, well, the 9-0 Blue Devils are the No. 2 team in the nation. So, let?s call that a ?quality? loss. But if you?re looking for an impressive win by the Buckeyes, keep looking. It?s just not there. But a visit from Kansas on Dec. 22 looms. Deshaun Thomas, Aaron Craft, Lenzelle Smith Jr., and LaQuinton Ross are leading the way.

6. Iowa. It has been a while since Carver-Hawkeye Arena buzzed in the winter. Well, that may change this season. Fran McCaffrey has the Hawkeyes off to an 8-2 start, but the best win has come vs. Iowa State. The losses? To Wichita State and Virginia Tech. Still, this is a deep and talented roster with a nice mix of veterans like Aaron White, Devyn Marble and Melsahn Basabe and freshmen like Mike Gessell, Adam Woodbury and Anthony Clemmons.

7. Nebraska. This is supposed to be a rebuilding year in Lincoln under new coach Tim Miles. And tough times figure to be ahead once conference play starts. But the 6-2 start has been impressive, considering the ample personnel losses on top of the new coaching staff. The ultra-upbeat Miles has led the Cornhuskers to victories over Valparaiso, Wake Forest and USC, with the losses coming to Kent State and Creighton. Not awe-inspiring, but impressive, nonetheless, when you consider the circumstances. Dylan Talley, Brandon Ubel and Ray Gallegos have led the way.