Dienhart: Purdue could use win over No. 24 Notre Dame 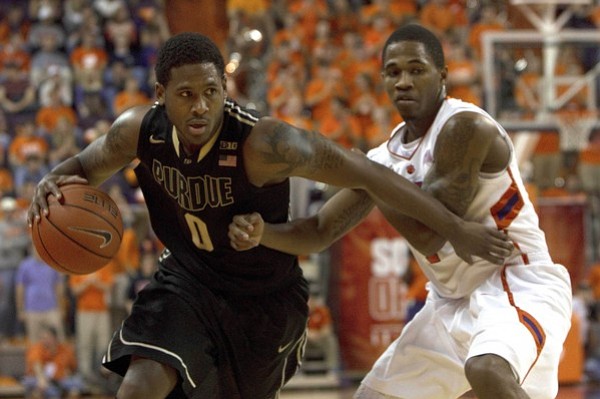 The hoop season continues to gain speed and momentum, as a bit more clarity is apparent with each passing week. Still, there are many unknowns. And that will remain so, as this is a slow week of action with many schools in finals week. Here?s a look at the week ahead, with the best games coming on Saturday.

GAME OF THE WEEK: Butler vs. Indiana, Dec. 15. The two best teams in the state lock horns in Indianapolis as part of a doubleheader that also includes Purdue playing Notre Dame. This will be the final test in the non-conference for the 9-0 and No. 1-ranked Hoosiers, who continue to roll behind the play of Cody Zeller and Co. Butler coach Brad Stevens always has his Bulldogs ready. In fact, Butler already has scored victories over the likes of Marquette, North Carolina and Northwestern. But the Bulldogs have lost to Xavier and Illinois. Are they ready for an Indiana squad that also has topped North Carolina, along with Georgetown? Should be a good one. In fact, I already hear Tom Crean clapping.

DON?T OVERLOOK THIS MATCHUP: Michigan vs. West Virginia. The 9-0 Wolverines are off to their best start since 1988-89 team won the national championship behind the sweet shooting of Glen Rice and interim coaching of Steve Fisher. (Whatever happened to Bill Frieder?) This is a deep and athletic Michigan team that can score an NCAA resume building victory vs. Bob Huggins? always tough, hard-defending and well-coached Mountaineer team. Still, 4-3 WVU is a work in progress, having lost to Gonzaga, Davidson and Oklahoma.

MUST WIN: Notre Dame vs. Purdue. Save for a January visit from West Virginia, this is the Boilermakers? last chance to score an impressive non-conference win. Still, sporting a 4-5 record and coming off one of the school?s worst losses in, oh, decades-47-44 at Eastern Michigan on Saturday-the Boilermakers? NCAA dreams already appear dim. And the first day of winter isn?t even here. But, never give up hope, right? Well, a win over a good Notre Dame team in Indianapolis would go a long way toward pumping up this struggling team?s psyche while enhancing its dossier. But this is an 8-1 Fighting Irish team that has a victory over Kentucky. Whatcha got, Boilers?

INJURY UPDATE: Indiana?s Austin Etherington suffered a broken left kneecap on Saturday vs. Central Connecticut State and is out for the season. Will this significantly hurt the Hoosiers? No, but the sophomore provided quality depth and his loss is an emotional blow, as Etherington is a well-liked player and teammate.

BIG WEEK: Again, this isn?t a big week for action, as no team has a lot of heavy lifting. Translation: This is a week filled with lots of cupcake games. I?m talking about Binghamton vs. Michigan; Norfolk State vs. Illinois; Savannah State vs. Ohio State; Tuskegee vs. Michigan State. Are you full yet after reading that? And there are no games on Thursday or Friday. Get the picture? So, take five, Big Ten-and pad your stats if you get the chance.

STAT WATCH: How about Michigan?s Jordan Morgan? The big fella is rounding into a complete player for a deep Wolverine team that has legit national championship hopes. In a win over Arkansas on Saturday, Morgan was at his well-rounded best, notching 12 points and 10 rebounds. On a team with plenty of star power with the likes of Tim Hardaway, Jr., Trey Burke and a collection of talented freshmen, Morgan blends in as the ultimate role player with averages of 6.9 points and 5.4 rebounds.