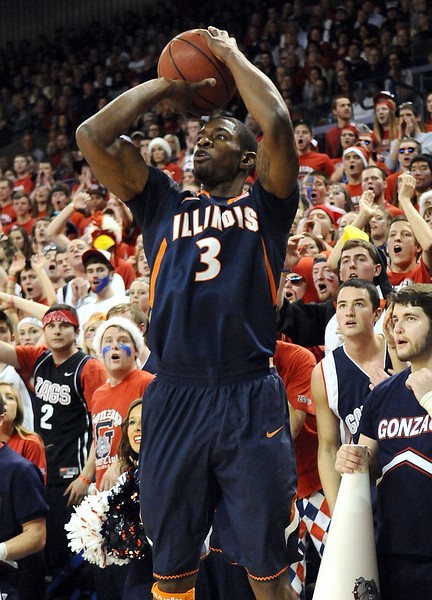 Up until Saturday night, Illinois? season has been described in strange terms. At that point, it was ?surprising? that Illinois was undefeated. The Illini won the Maui Invitational, which was a very ?prestigious? early-season tournament. This isn?t normally how one talks about an undefeated team that?s ranked in the top-15.

That's because very few people were declaring that this team was actually as good as it looked on paper. That?s partly a function of having not played a murderer?s row of opponents (Butler destroyed the Maui bracket, making it such that Illinois might not have played a single NCAA Tournament team on the island), and partly because Illinois was living by the three-point shot. Not only was John Groce?s team shooting a ton from behind the arc, but they were making them. In just about every other way, Illinois was run-of-the-mill. I suspect that many didn?t see the team?s reliance on the long ball as sustainable.

Well, after Illinois knocked off a legitimate top-10 team on the road, I think we?re going to see a different narrative. Yes, this Illini team is for real. But that doesn?t mean that it?s different from the team that everyone saw prior to the Gonzaga game.

Illinois does rely heavily on the three-pointer, it does not have much of an inside game, and when the shots aren?t falling, the team will struggle. The good news is that Groce has this team shooting very well, and given his track record in developing excellent jumpshooting teams, it?s probably not a fluke.

Of course, let?s not forget that Illinois? win was fueled by a 35-point outburst by Brandon Paul. This is Paul?s second-highest point total in his collegiate career, the best number being his 43-point performance in a win over top-ranked Ohio State last season. That win pushed the Illini?s record to 15-3, but the team would lose 12 of its remaining 14 games.

Just like last year, Illinois has had some very close games against bad teams. Groce?s challenge is making sure this year?s team does not duplicate last year?s collapse. That said, as long as Illinois does not get hesitant when the shots aren't falling, this should be a very good season in Champaign.

But it wasn?t all good news for the Big Ten this weekend. Purdue dropped a road game against Eastern Michigan, and this team might end up being the worst loss in Matt Painter?s head coaching career. The offense continues to sputter, as the Boilermakers managed to score just 0.74 points per possession, the lowest figure by Purdue in two-and-a-half seasons. A big part of the problem is D.J. Byrd, who after making 5 of his first 6 three-point attempts against Clemson, has missed his last 18 attempts from beyond the arc. With Byrd largely ineffective, that leaves Terone Johnson as the only reliable scoring option for the Boilers. And Johnson?s 59 percent accuracy at the free-throw line suggests that his 40 percent accuracy from three is an illusion. Purdue needs Byrd back if it?s going to salvage the season, though at this point the best case scenario looks like an NIT bid.

Fresh off notching an impressive road win at Baylor, Northwestern stumbled at home against Butler. Andrew Smith lit up the Wildcats for 24 points on just 11 shots en route to the win, which put a damper on Dave Sobolewski?s big night (21 points on 11 shots, but also with 6 turnovers and 5 fouls). The culprit was defense, as the Cats allowed Butler to shoot over 50 percent on its two-point shots and rebound half of their misses. Northwestern still has another opportunity to grab a quality non-conference win when it hosts Stanford in a couple of weeks, but ultimately this team is going to need to win 8 or 9 conference games to make the Dance, and for that to happen, the defense still has a ways to go.

Wisconsin lost its rivalry matchup against Marquette on Saturday, which isn?t a bad result in and of itself. Marquette is at least a decent team and was playing at home, but the Badgers just haven?t put together a very good non-conference resume. Florida, Creighton, Virginia, Cal, and Marquette all could end up as top 50 RPI teams, and UW is a combined 1-4 against that group. If the Badgers end up on the bubble, losses to bubble competitors could really come back to haunt them. If the Committee is picking between Marquette and Wisconsin, for instance, it?s going to be hard to ignore the head-to-head matchup as a tiebreaker of sorts. Wisconsin?s offense sputtered against Marquette?s pressure, but the real problem this team needs to fix is the player of senior Ryan Evans. Evans is the team?s leading returning scorer, and was expected to anchor Wisconsin?s attack. Instead, he?s been a significant drag on the offense. He came to Madison as a limited shooter, but he appeared to shed that label last season, when he made enough jumpers to at least be a threat if left open.

But right now, Evans is broken. He?s made only 1 of his 15 attempts from three-point range, and after his 1 for 9 performance on Saturday, he?s now shooting 31 percent from the free throw line. At this point, I wonder if he?s suffering from Steve Blass Disease. Although Evans is still a plus defender, it might not be too long before the senior?s minutes start getting consumed by freshman Sam Dekker.

Minnesota became the third Big Ten team to beat the stink out of USC, who went 1 for 11 from behind the arc against the Gophers. Trevor Mbakwe continues to round into form, as he contributed 12 points in 26 minutes. Mbakwe appears to be nearly all the way back, and I expect we?ll see him at full strength by the time the conference season rolls around. That?s a very scary thought for the rest of the Big Ten.

(Apologies for missing the Iowa game-for some reason, that game seemed like two weeks ago in my mind)

I would be remiss (and indeed I was remiss) to overlook Iowa's win over in-state rival Iowa State. I don't know that we have a good read on the Cyclones just yet-they've only played a couple of good teams coming into this matchup, and lost both of them by at least 8 points-I think they'll at least be in the bubble conversation. Aaron White continues to have a big season, as he grabbed 7 boards and scored 18 points on 13 shots. The big man from Ohio should challenge for First Team honors with his ability to finish and get to the free-throw line. Indeed, I predicted big things for Mr. White in this year's College Basketball Prospectus based on one of the things he did as a freshman. Statistically, players who were similar to White in that regard showed a very high tendency to leap forward as sophomores (have I made the sale yet? Available in paperback or PDF!)

This is a big win for Iowa in that they're shaping up to be a team that wins 8 or 9 games in conference play, which means that they'll probably be a little nervous on Selection Sunday. Up to this point, the Hawkeyes had not yet recorded a win over a quality non-conference opponent. Next weekend, they'll face Northern Iowa, which also might end up making some noise in the Missouri Valley. Win that, and I think Iowa will still be on track to return to the Tournament. At some point, however, the outside shooting needs to improve. In that respect, White needs to step his game up even more (currently, he's just 2 for 16 on threes).

It's a little quiet this week as the players prepare for finals, but next weekend will provide some great matchups (Indiana/Butler, Michigan/West Virginia, Purdue/Notre Dame).