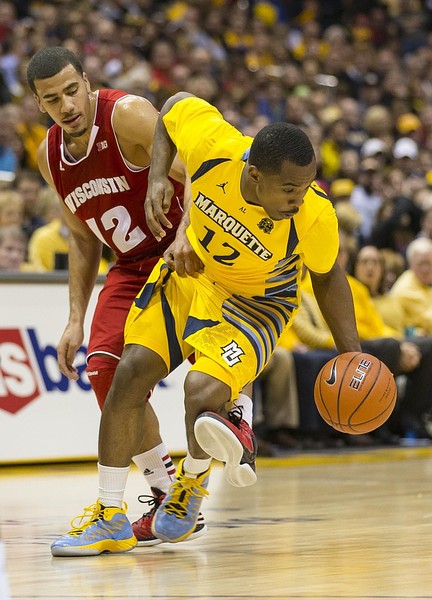 Junior Cadougan scored 13 of his 18 points in the final 10 minutes and Vander Blue added 17 points to lead Marquette past rival Wisconsin 60-50 on Saturday night.

Marquette, coming off an 82-49 loss at No. 6 Florida on Nov. 29, led the entire game but wasn't able to shake the Badgers until the closing minutes.

No Wisconsin player scored in double digits with Jared Berggren and Ryan Evans each scoring nine points. Davante Gardner scored 10 points off the bench for Marquette (6-2).

HALFTIME: Vander Blue scored 15 points for Marquette as the Golden Eagles lead Wisconsin 34-20 at the half. The Badgers were limited to 35 percent shooting. The Golden Eagles led by as many as 14 points in the first half and never trailed. The game was tied before Wisconsin went into a funk, going the next 2:16 without scoring, and allowing Marquette to take a 7-0 lead early in the game.