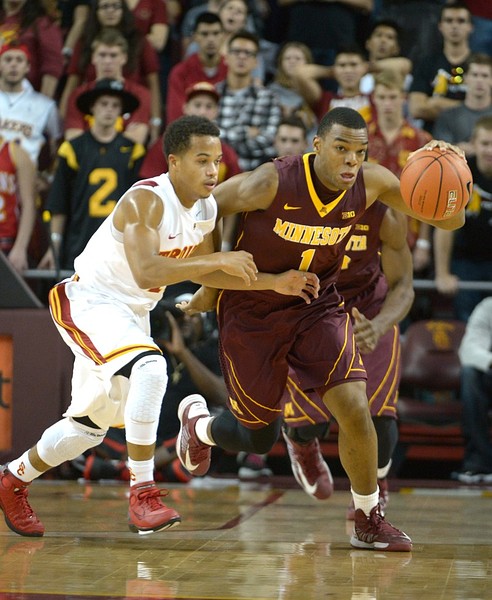 Rodney Williams added 13 points and 11 rebounds for his first double-double of the season, and Trevor Mbakwe had 12 points for the Gophers (10-1), who led all the way on their first trip to play USC in Los Angeles since Dec. 29, 1980.

FINAL: Rodney Williams Jr. scored 13 points and grabbed 11 rebounds to lead No. 21 Minnesota to a 71-57 win over USC on Saturday at Galen Center in Los Angeles. Andre Hollins was 5-of-8 from the floor and chipped in 13 points for Minnesota. The Golden Gophers (10-1) shot 19-of-27 from the free throw line and accounted for 16 assists on their 23 baskets. Trevor Mbakwe added 12 points and Joe Coleman chipped in 10. Byron Wesley had 13 points, grabbed five rebounds, and went 6-of-9 from the field for USC (3-6) in the loss. More USC scoring came from Omar Oraby, who scored 15.

HALFTIME: Andre Hollins has seven points to lead seven Gophers in the scoring column, and No. 21 Minnesota owns a 38-26 halftime lead at Southern Cal. The Golden Gophers scored the game's first nine points and led by as many as 15 in the opening 20 minutes. J.T. Terrell, who entered the game averaging 12.5 points per game, has not made much of an impact, with zero points. The Golden Gophers played team basketball in the first half, to the tune of 11 assists on 15 field goals.