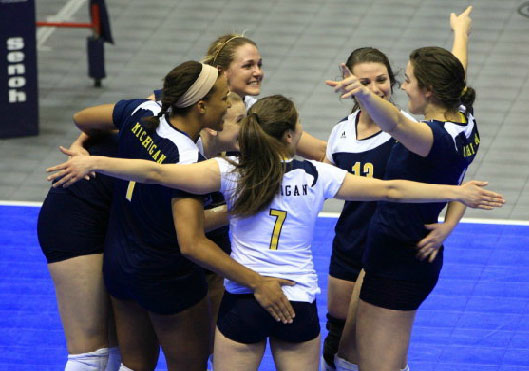 For a remarkable fifth time in the last six years, the Penn State women's volleyball team has advanced to the national semifinals. The Nittany Lions dropped Big Ten rival Minnesota, 3-1, in the regional finals Saturday night. Nebraska wasn't as lucky, though, as it lost its regional final to Oregon, 3-1. Michigan plays Stanford later tonight.

Penn State 3, Minnesota 1: The No. 1 seed Penn State women's volleyball team (33-2) advanced to the NCAA Women's Volleyball National Semifinals with a 3-1 (25-19, 19-25, 26-24, 25-20) win against eighth-seeded Minnesota. The Nittany Lions have advanced to the national semifinals five times in the last six seasons.

Michigan 3, Stanford 1: The University of Michigan volleyball team clinched the program's first NCAA Final Four appearance with a 20-25, 25-20, 25-20, 25-20 upset win over No. 2 Stanford on Saturday night at Haas Pavilion. The triumph marks U-M's third NCAA Tournament victory over a top-six ranked Cardinal squad in the past four seasons. Michigan will take on Texas in the national semis at 7 p.m. ET Thursday.

Junior and Berkeley Regional MVP Lexi Erwin led Michigan with 23 kills and made it a double-double with 16 digs. She was one of four Wolverines in double figures in terminations. Read full recap at MGoBlue.com.

Oregon 3, Nebraska 1: The fifth-seeded Oregon Ducks advanced to the first NCAA Semifinals in school history, rallying from a slow start to post a 3-1 victory over the fourth-seeded Nebraska volleyball team in front of 9,382 fans at the CenturyLink Center. The Huskers dominated the first set of the regional final in a 25-15 victory, but the Ducks won the next three sets, 25-22, 25-18 and 25-17.

With the win, Oregon (29-4) advanced to face No. 1 Penn State on Thursday at the KFC Yum! Center in Louisville, Ky. The match will start at either 6 or 8 p.m. (Central) and will be televised live on ESPN2. Nebraska fell just short of its 12th NCAA Semifinal appearance, finishing its season with a 26-7 record. Read full recap at Huskers.com.