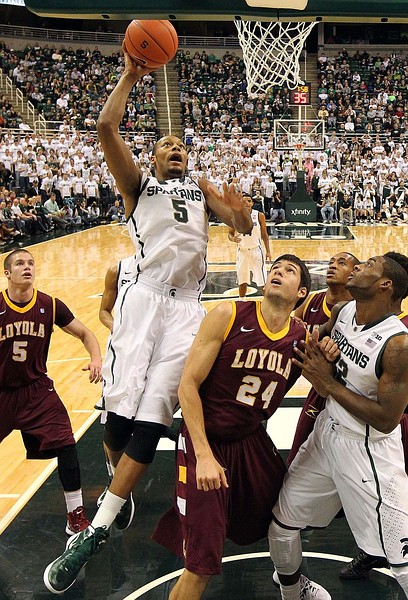 Down 32-30 at the break, the Spartans went on a 22-9 run to take control. Harris hit three 3-pointers during the burst.

Ben Averkamp had 25 points, including four 3s, and eight rebounds for the Ramblers (6-3).

Adreian Payne drives for And-1:

Branden Dawson swats it from behind:

FINAL: Adreian Payne scored 14 points and grabbed 11 rebounds and Gary Harris added 20 points and three boards to lead No. 17 Michigan State to a 73-61 victory over Loyola (IL) on Saturday at the Breslin Center. The lead changed hands eight times in a back-and-forth affair. Michigan State (8-2) hit 49 percent of its field goals (22-of-45). The Spartans were hot from long range, hitting 7-of-16 threes for a 44 percent night from beyond the arc. Michigan State went 22-of-28 from the charity stripe as a team (79 percent). The Spartans also got a double-digit effort from Travis Trice, who scored 11.

HALFTIME: Adreian Payne is doing all he can, but No. 17 Michigan State is down 32-30 to Loyola (IL) as the teams head to halftime. In the first 20 minutes, Payne scored nine points, grabbed six rebounds, and shot 3-of-3 from the field. Loyola put the clamps on Michigan State's three-point game (2-of-9, 22 percent from long range), while the Spartans shot 54 percent in the first half on two-point field goals.  Loyola's Devon Turk already has eight points.