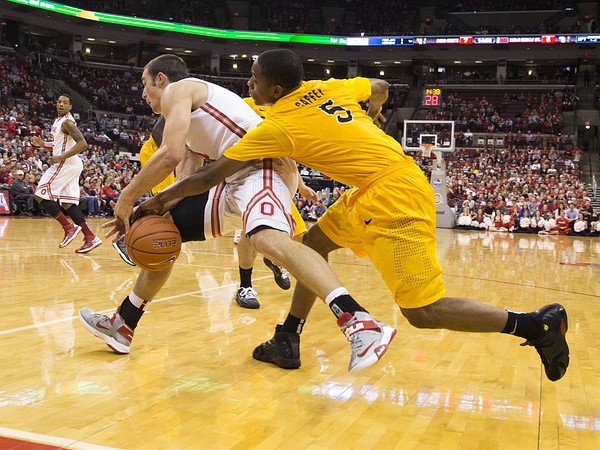 Deshaun Thomas had 18 points to lead No. 7 Ohio State past tired Long Beach State 89-55 on Saturday. LaQuinton Ross had 16 points in a reserve role, Lenzelle Smith Jr. added 14, and Sam Thompson had 13 for the Buckeyes (6-1), who built a 42-point lead before experimenting with different lineup combinations.

Dan Jennings scored 16 points and James Ennis had 12 for the 49ers (3-6), who have dropped three straight. They lost at No. 4 Syracuse 84-53 on Thursday before taking on another top-10 team just over 40 hours later.

Up by 14 at the break, the Buckeyes wasted little time in putting the game out of reach.

LaQuinton Ross gets the bucket down low:

FINAL: LaQuinton Ross scored 16 points and grabbed nine rebounds and Lenzelle Smith Jr. added 14 points and 10 boards as they teamed up to lead No. 7 Ohio State to an 89-55 victory over Long Beach State on Saturday at Value City Arena in Columbus. Ohio State (6-1) hit 47 percent of its field goals (31-of-66) and snatched 15 offensive rebounds. More Ohio State scoring came from Deshaun Thomas (18 points) and Sam Thompson (13).

HALFTIME: LaQuinton Ross and Lenzelle Smith Jr. combined for a successful first half as No. 7 Ohio State leads 39-25 over Long Beach State. Ross scored 10 points and grabbed six rebounds, while Smith Jr. scored eight points and pulled down seven rebounds. Ohio State, which never trailed in the first 20 minutes, went 15-of-15 from the charity stripe and owned the battle of the board (24-12). Seven of Ohio State's rebounds came on the offensive end, leading to second-chance opportunities.