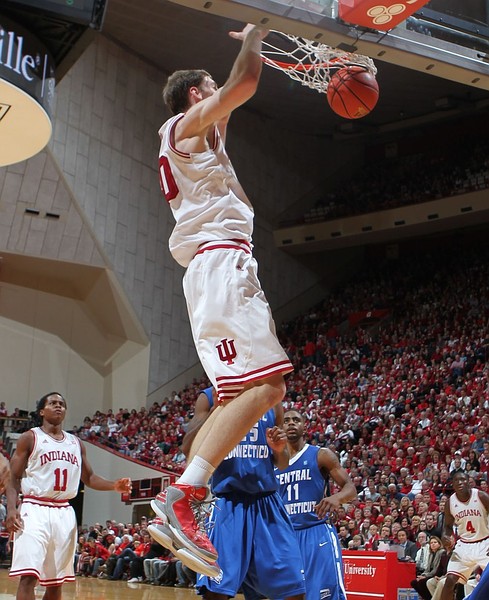 Christian Watford scored 21 points, Cody Zeller had 19 points and 19 rebounds, and No. 1 Indiana routed Central Connecticut State 100-69 on Saturday. The Hoosiers (9-0) dominated on both ends of the floor.

They opened the game by making 15 of their first 21 shots and finished at 54.2 percent for the game.

Indiana was even more impressive on defense, holding Kyle Vinales, the nation's No. 1 scorer at 25.9 points, to just 3-of-15 shooting and seven points. Matt Hunter led the Blue Devils (4-4) with 40 points.

Christian Watford throws it down with two hands:

Will Sheehey drives for two-handed flush:

Christian Watford throw it down:

FINAL: Matt Hunter led Central Connecticut State with 40 points and seven rebounds, but it was not enough as the Blue Devils fell to No. 1 Indiana 100-69 Saturday at Assembly Hall in Bloomington. Cody Zeller scored 19 points and grabbed 17 rebounds and Victor Oladipo added 15 points an nine rebounds to pace the Hoosiers. Indiana shot 55 percent from the field (39-of-71) and secured second-chance opportunities with 18 offensive boards. Christian Watford had a quality shooting game, nailing 8-of-12 shots from the field and scoring 21 points

HALFTIME: Cody Zeller scored 13 points and grabbed seven rebounds for No. 1 Indiana in the first half to carry the Hoosiers to a 53-34 lead over Central Connecticut State. Victor Oladipo had a big first half, as well, scoring 11 points and grabbing four rebounds. The Hoosiers were leading 25-16 when they used a 12-0 spurt to widen their advantage to a 21-point margin.