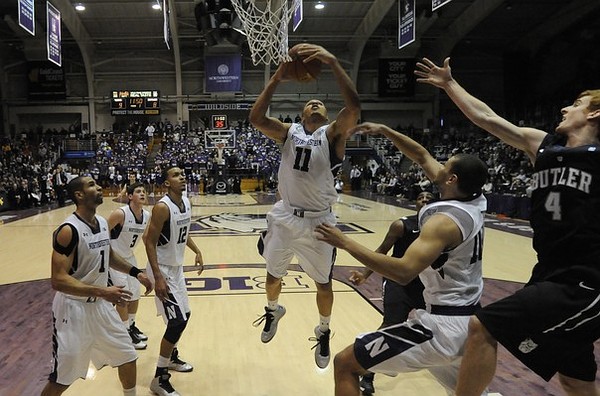 Andrew Smith scored a season-high 24 points and Butler pulled away in the second half for a 74-65 win over Northwestern on Saturday night.

Smith had 19 points in the second half – including nine straight – and added 10 rebounds for the Bulldogs (7-2), who shot 48 percent en route to their fourth straight win overall and fourth straight against the Wildcats (7-3).

Rotnei Clarke was 4 for 6 on 3-point attempts and finished with 13 points for Butler. Kellen Dunham added 11 points and Roosevelt Jones had 10.

Dave Sobolowski scored 21 points for Northwestern, which shot just 32.7 percent from the field but stayed close by converting 22 of 31 free throws. Tre Demps added 15 points and Reggie Hearn had 13.

FINAL: Andrew Smith scored 24 points to lead Butler to a 74-65 win over Northwestern on Saturday at Welsh-Ryan Arena in Evanston. Butler (7-2) hit 47 percent of its field goals (24-of-51) and shot 20-of-29 from the free throw line. Butler also got double-digit performances from Roosevelt Jones, who scored 10, Kellen Dunham, who scored 11, and Rotnei Clarke, who scored 13. Dave Sobolewski scored 21 points and made 6-of-11 shots from the floor for Northwestern (7-3) in the loss. Tre Demps had a quality shooting game, nailing 6-of-8 shots from the field and scoring 15 points.

HALFTIME: It is still anyone's game as Northwestern and Butler have passed the lead to each other six times already in the first half. At the moment the Bulldogs are on top 34-31. Butler shot 5-of-10 from beyond the arc in the first half (50 percent). The Wildcats' Dave Sobolewski had a big first half, with 14 points. Rotnei Clarke is putting together a nice game so far for the Bulldogs. The senior has nine points.