Big Ten Links: Well, that was an interesting week 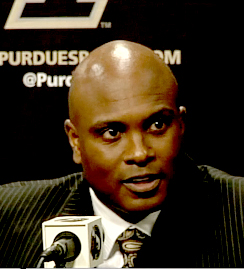 What a week in the Big Ten! Purdue hires a coach. Wisconsin sees a coach bolt. The Silver Football is handed out. At least the Big Ten didn?t expand this week. But that didn?t stop the discussion about future growth.

What league will make the next move? Big Ten Commissioner Jim Delany says the Big Ten is ?inactive but alert? on expansion. Read about that and other Big Ten grid news in my daily links.

"Monitoring the landscape is overused so we're trying to figure out what's the most apt way to describe where we are," Delany told the Associated Press. "One hundred percent moving toward integration of the 14 (members). With schedules, branding and divisional alignment.

"We assessed staying where we were, and thought there was some risk to that long term," he added. "We also understand that there's risk when you expand because you could get brand dilution."

It all sounds good. But, golly, don?t you think growth to 16 is coming sooner rather than later?

On that note, have you taken our Big Ten expansion and realignment survey? You should. Good questions.

After suffering a 70-31 thrashing in the Big Ten title game, Nebraska has some negative energy around the program. Understandable. But Husker running back Rex Burkhead has had enough of it and says it?s time to move on.

I agree. Gotta turn the page. But, it?s frightening how quickly things turned. Just like that, in one disastrous swoop, the Huskers seemingly undid all the good of a six-game winning streak that culminated in a 10-2 record entering the title game last Saturday night.

"We know what we've done," Burkhead told Steve Sipple of the Lincoln Journal Star. "Obviously, our goal was to win a Big Ten championship, and we didn't get that done. But it doesn't overshadow the fact we did put up some impressive wins, some great comeback wins. I feel like we've had a good year."

Now comes a game against a Georgia team that?s among the top 10 in the nation. Gulp.

The great David Jones of the Harrisburg Patriot-News thinks Bill O?Brien will be at Penn State for a while, but temptation to leave always lurks.

Money-BIG money-and talent-BIG talent-beckons at some other jobs. The lure of both is powerful; witness Bret Bielema?s head-spinning departure for Arkansas. Regardless, Jones reassures us that O?Brien is firmly planted in State College, Pa.-at least for today. Besides, if someone wants to pry O?Brien out of Penn State, it?ll cost a pretty penny: Try about $18.4 mil.

Mike Carmin of the Lafayette Journal Courier gives us the anatomy of the hiring of Darrell Hazell at Purdue.
Some tidbits. The first contact between Purdue and Hazell was Nov. 28, two days before the MAC title game. And it?s interesting to see how involved former Ohio State coach Jim Tressel was, talking to both parties during the process.

It?s that time of year: Heisman Trophy time. Check out this video on Cleveland.com of Archie Griffin sharing his Heisman memories.

Barry Alvarez addressed the media yesterday, confirming that he will coach the Badgers in the Rose Bowl and discussing the search process to replace Bret Bielema. If you ask esteemed Wisconsin State Journal columnist Tom Oates about the opening, he thinks Big Barry won?t have any issues filling it.

Oates is correct, of course. This is a top 20 job in America. Arkansas? I don?t think it?s a top 20 job. When were the Hogs last national title contenders? While you are thinking of that, know this: The Hogs have won ZERO SEC titles. Now, compare that to what has been done at Wisconsin the last 20 years. Knowing Bielema inferred at his introductory presser that you couldn?t win at the highest level at Wisconsin was so silly.

We all know Illinois needs help-lots of help. So, it should be no shock to learn that Tim Beckman already has commitments from five-count ?em, FIVE-JC transfers.

And the Illini may not be done, as they could add more-particularly on the offensive line. All together now: ?Quick fix.?

Please tell me you aren't shocked. The guy was spectacular. But I am shocked Miller didn?t garner enough votes to be a Heisman finalist. Oh, well: Maybe next year.

I will give credit to Bielema for coming back and telling his players the news face-to-face. Todd Graham sent a mass text when he left Pitt.

My take: Bret always struck me as a ?stand up? guy. Not surprised he did this.

My take: Yes, I would think Pat would be a top target. He was DC at Cincinnati under Mark Dantonio.