Big Ten Geeks: Four weeks in & what do we know? 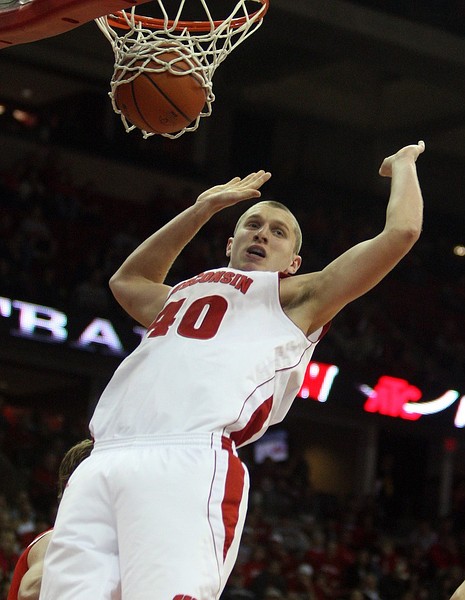 With the volume of competitive games slowing considerably this week, it seems like a good time to reflect on what we?ve seen in the first four weeks of the 2012-13 basketball season. This statement could prove a bit premature, as Berggren has struggled with conference play in his career, but Wisconsin?s senior center has been off the charts. Berggren is shooting 65 percent on twos, 41 percent on threes, and 84 percent on free throws, all while dominating the offensive glass and rarely committing a turnover. And that?s just the offensive end. Berggren is one of the best defensive big men in the country, and he?s averaging just one foul per 40 minutes. While college production doesn?t always translate to the NBA, and defensive rebounding is still a concern, I think Berggren ends up making the Association.

This Nebraska squad has been better than expected in its 6-2 start, but last night?s pasting at the hands of Creighton should bring expectations more appropriately back to earth. After the Huskers? win over USC, I saw some fans and commentators surmise that Nebraska should be able to finish somewhere in the middle of the Big Ten, which is obviously ludicrous. Sure, Tim Miles has the Huskers playing hard and hitting the defensive glass well, but this is still a very limited roster. Here?s some perspective: Nebraska?s two best wins are over Valparaiso and Tulane; once conference play starts, Nebraska will face only one team rated worse than those squads (Penn State, twice). Three Big Ten wins is still an appropriate expectation, but at least the Huskers have given their fans some enjoyment in what looked to be a very rough season. The fun could even continue with several winnable games left on the non-conference slate.

The headliner types are off to a great start (Sam Dekker, Gary Harris, Glenn Robinson III, Yogi Ferrell), but the B1G class of 2012 also appears to boast considerable depth. Nik Stauskas has been incredible for Michigan (he?s like a 6-6 Jordan Hulls), and big man A.J. Hammons has been a bright spot for Purdue. Iowa has struggled against better competition, but Adam Woodbury and Mike Gesell have held their own. Denzel Valentine has already claimed a starting spot at Michigan State. Even Penn State and Nebraska have gotten positive play from Brandon Taylor and Benny Parker. This class should have the conference set up well for years to come, which dovetails nicely with the next point…

Aside from guys like Brandon Paul and Jared Berggren, the best players in the conference are juniors or sophomores. Cody Zeller, Deshaun Thomas, and Trey Burke will all have early-entry decisions to make after the season, but the Big Ten could be an absolute monster in 2013-14 if a couple of them return. Throw in some very good 2013 recruiting classes and there?s no reason to expect the Big Ten to be knocked from the top of the college basketball heap anytime soon.

This may seem like old news after his 41-point outburst against Memphis, but it?s clear that Hollins is playing at a different level from last season. Basically every part of his game has improved, and the sophomore is now playing at an all-conference level. Minnesota has played like a top-10 team, and it is Andre Hollins, not Trevor Mbakwe, that has led that charge.

While the Boilermakers may have already done too much damage to their resume to compete for an at-large bid, this is not a bad squad. The Boilers have been dominating the glass, and they?ve done a very good job at limiting open threes (opponents are taking just a quarter of their shots from deep). So while this Purdue offense will continue to struggle, the defense appears good enough to keep the Boilers competitive in conference play. Games at Mackey Arena will be no cakewalk.

It?s a bit of a quiet time for the Hoosiers, what with six off days on either side of Saturday?s game against Central Connecticut, but we can take an updated look at Indiana?s three-point shooting. Just like last time, we?re looking at both accuracy and frequency in relation to the same point last season: 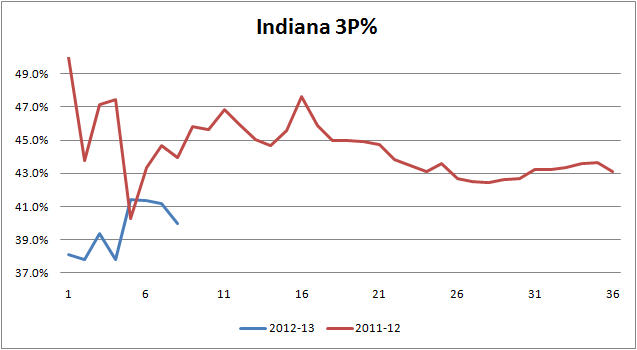 The Hoosiers are, predictably, shooting worse than last season, but not by much. Indiana is hitting 40 percent from deep, maintaining the three-point shot as a very valuable weapon. Note that the team average would be 36.5 percent were it not for Remy Abell?s 10 for 12 performance. I thought Matt Roth had graduated, but maybe he?s just wearing a Remy Abell costume. In all seriousness, Abell?s return to earth should coincide with improvement from others who have shot worse than their ability (Victor Oladipo, Will Sheehey), so we shouldn?t expect a huge drop in team accuracy.

It?s still a bit surprising to see Indiana taking so many more threes than last season: 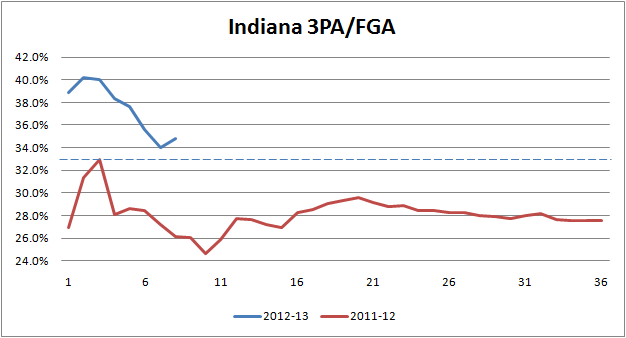 Again, the national average is the dashed line, right around 33 percent. Indiana has gone from reluctant to willing when it comes to hoisting three-point shots, and it seems unlikely now that the Hoosiers will fully revert to last season?s tendencies. This team is open to taking threes, which is very smart when you?re making 40 percent of them.

With college football finally stepping aside, basketball will take the main stage this weekend, and there are some intriguing games involving Big Ten teams. Tonight, Iowa hosts Iowa State in a very big game for the Hawkeyes? tournament resume. Nearly the entire conference plays on Saturday, with some very nice matchups included (Illinois at Gonzaga, Wisconsin at Marquette, Northwestern vs Butler). Forget about the pigskin–this weekend belongs to hoops.