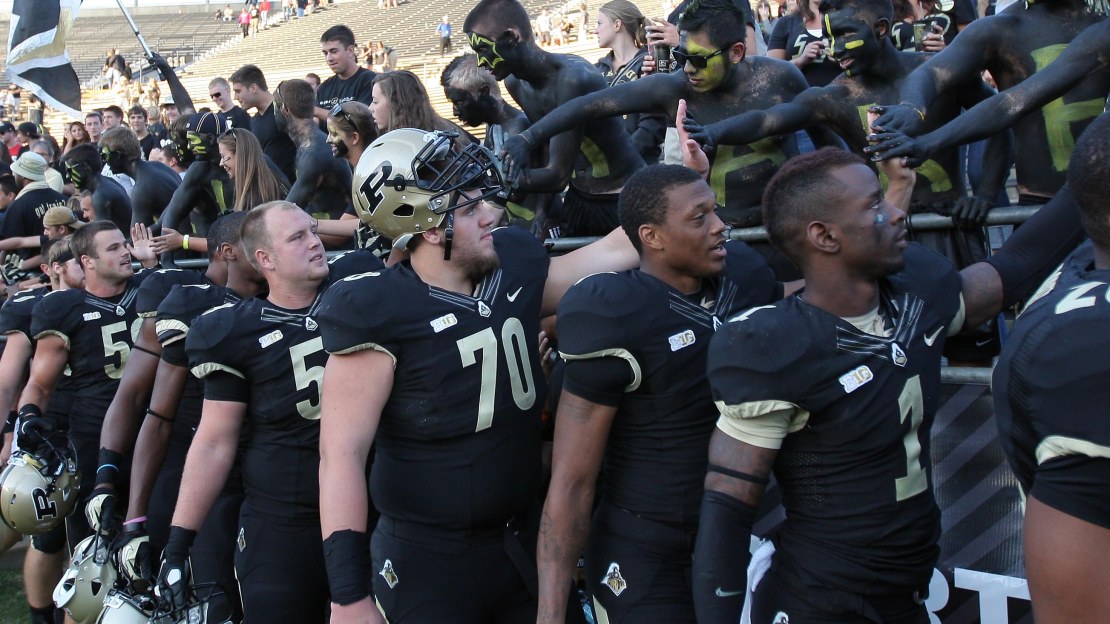 It?s true: There is other Big Ten news NOT involving Bret Bielema shocking the hemisphere by ditching Wisconsin for Arkansas (Arkansas?!). I have some below in my daily links. Really. The headliner: Purdue took the wraps off a new era with a press conference to announce the hiring of ? ta-dah! ? Darrell Hazell as head coach.

Hazell takes over for overmatched Danny Hope, whose teams lacked-among other things–consistency. I?ll just stop there. Hazell doesn?t inherit a program that?s wrecked, but he needs to enhance the talent and give the program an identity. And Hazell may provide a boost in recruiting.

He will be the lone minority coach in the Big Ten-and Purdue?s first minority head coach in football or men?s basketball. Before going home for the night, the great Mike Carmin of the Lafayette Journal Courier pondered five questions about the new Boilermaker boss and era.

Among the vexing queries: How will Hazell deal with facing perhaps the toughest schedule in school history in 2013? Check it out: At Cincinnati and Wisconsin. Home against Notre Dame and Northern Illinois. That?s all before Oct. 1. Throw in Nebraska?s first appearance in West Lafayette since 1958 and matchups against Michigan State, Ohio State … you get the picture.

Would Ohio State have reached the BCS title game in it was eligible? The question continues to nag. Well-thankfully–Doug Lesmerises of the Cleveland Plain Dealer digs into it.

And his final conclusion based on the Plain Dealer?s Fake BCS standings: Ohio State would not be playing for the national title, even if the Buckeyes were eligible.

Minnesota coach Jerry Kill?s issues with seizures are well-documented. In fact, some worry they are becoming a distraction. But the great Sid Hartman of the Minneapolis Star-Tribune writes that Kill is convinced they?ll find a cure for them.

Kill told Hartman what he's not going to do is worry about how he is perceived in dealing with his illness. Kill revealed the advice his dad gave him when dealing with skeptics: "I hear what you're saying and I'll trust what I do."

We all hope Kill gets this under control. He?s a terrific coach and good person who seemingly has Minnesota pointed in the right direction.

Did any team play a tougher schedule than Michigan in 2012? Maybe not. The Wolverines hope that rugged menu prepped it for their Outback Bowl clash with mighty South Carolina.

The Wolverines played the top three teams in the AP poll: Notre Dame, Alabama and Ohio State. Michigan hung with all but Alabama, Kyle Meinke of MLive.com notes. This was a young Wolverines team with a bright future.

How will the Penn State quarterback situation play out with Matt McGloin departing? It?s a murky conundrum that will be fun to watch.

Steven Bench will be the lone signal-caller on the spring roster, unless a JC quarterback arrives (Hello, Jake Waters?). Then, in the summer, touted Christian Hackenberg will arrive. Audrey Snyder of the Harrisburg Patriot-News wonders if Penn State's offense will thrive next season with a young quarterback running a complex scheme. The quarterback needs to be in complete control to run the system the correct way and the knowledge of the offense is just as important as the physical skills.

Now, as promised: Your Bret Bielema fix. The latest ripple from Bielema?s stupefying departure to Arkansas is news that Wisconsin A.D. Barry Alvarez will coach the Badgers in the Rose Bowl.

Why not? I love it. In fact, Alvarez is the 3-0 in Rose Bowls, beating Stanford in Pasadena after the 1999 season for Wisconsin?s last victory in the ?Granddaddy Of Them All.? That?s good enough for me, especially knowing that Bielema was 0-2 in the Rose Bowl with an embarrassing loss to TCU.

He will make $3.2 million per season. That will buy a lot of those plastic Hog hats to replace the closet full of cheese heads he surely will throw away.

Loren Tate of the Champaign News-Gazette chimes in on Bielema. Why not? Everyone has an opinion. Tate wonders if what worked for Bielema in the Big Ten-power football–will work in the SEC. Of course it will. Have you seen Alabama?s style of play?

Speaking of identity, it would be good for Illinois to get some type of one, says Tate. What is it now? Tate says it is related to failure. The Illini finished 11th or 12th in the Big Ten in rushing, total offense, first downs, points and yards allowed, sacks allowed, pass-defense efficiency, kickoff returns, punt returns, interceptions and turnover margin.

Whew! Someone get me a towel.

My take: This would be a great hire.

Am told game result will apply to Barry Alvarez's Rose Bowl coaching record. Can tie Woody Hayes for most wins in B10 history. #badgers

My take: Seems kinda cheap, if you ask me.

Delany on whether Legends and Leaders will stick as division names: 'To be determined."

My take: This is good news, America!

My take: (I have my hand raised right now.)