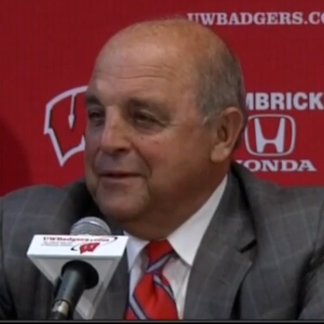 Wisconsin athletic director Barry Alvarez announced Thursday morning that he will coach the Wisconsin Badgers in the Rose Bowl after the Badgers players asked him to lead them in Pasadena.

"My first concern is about the players," Alvarez said as he explained the decision. After Bret Bielema accepted the job as football coach at Arkansas, Alvarez said he was contacted by Wisconsin co-captain Mike Taylor and said the players told him they would like Alvarez to coach them in the Rose Bowl.

"I told him I would be honored to coach them," Alvarez said. "I wanted them (the players) to understand, if I'm going to coach, we weren't going to screw around, we're going to go out and win."

[ AP: Wisconsin is going retro for the Rose Bowl. ]

Alvarez said it would just be for this one game. When asked if he ever missed coaching, Alvarez drew some laughs from the crowd when he answered, "Just on the big games."

Alvarez said he didn't think it would be appropriate to hire former Wisconsin coordinator Paul Chryst after Chryst spent just one season as Pitt's head coach. "Paul is going to stay at Pitt," Alvarez said.

Recently elected to the College Football Hall of Fame, Alvarez coached Wisconsin for 16 seasons (1990-2005) and won three Big Ten and Rose Bowl titles. He finished No. 1 on Wisconsin's a;;-time win list with a record of 118-73-4 record.

Alvarez knows bowls as he has coached or played in 22 bowl games at Wisconsin, Notre Dame, Iowa and Nebraska.

This morning in his daily links post, BTN.com senior writer Tom Dienhart wrote, " I love it. In fact, Alvarez is the 3-0 in Rose Bowls, beating Stanford in Pasadena after the 1999 season for Wisconsin?s last victory in the ?Granddaddy Of Them All.? That?s good enough for me, especially knowing that Bielema was 0-2 in the Rose Bowl with an embarrassing loss to TCU."

Here are a few tweets:

Pitt's Paul Chryst will not be a candidate at #Wisconsin, says AD Barry Alvarez

Barry Alvarez: "There is no venue prettier than the #RoseBowl. It's a special place … It doesn't get a bit old to me." #Badgers

Barry Alvarez is doing what he does best: showing he's in charge. #badgers

Barry Alvarez: "I wanted them to understand, if I'm going to coach we weren't going to screw around, we're going to go out and win" #Badgers