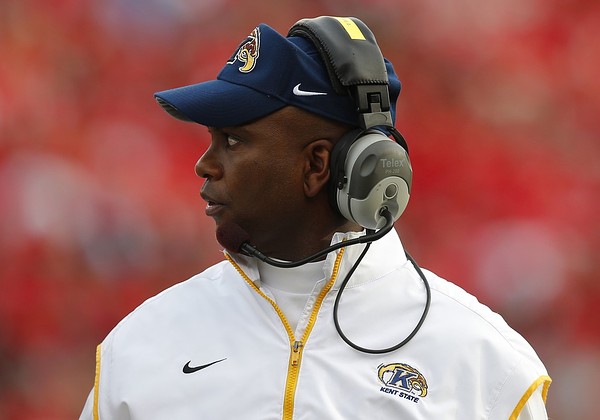 (AP) Morgan Burke wants Purdue back in the Rose Bowl, and he's willing to put his money on Darrell Hazell to get there. After a whirlwind week of speculation, Burke ended the chatter by introducing the 48-year-old New Jersey native as the Boilermakers' head coach Wednesday.

The contract is for six years and comes with a succinct message from Burke: The Cradle of Quarterbacks is about to start rocking again.

"We did it because we want to get back to Pasadena," Burke said.

Hazell comes to West Lafayette with a perfect resume.

He's a disciplined student of the game who spent seven seasons as the receivers coach at Ohio State under Jim Tressel, where he spent part of the time as the Buckeyes' assistant head coach and most of his time pleading with the sweater-vested coach to throw more.

After more than two decades, Hazell finally got a chance to run his own program – becoming the first black coach at historically bad Kent State.

In just two seasons, Hazell was already turning heads. The Golden Flashes went 5-7 in 2011, good enough to give longing Kent fans hope in 2012.

Kent State delivered on that promise, too, finishing 11-2 (8-0) for the school's first winning season since 2001. They won the East Division crown, got the school's first bowl bid in four decades and came within a victory in the league championship game of playing in the MAC's first BCS bowl game. The loss to Northern Illinois sent Kent State to the Jan. 6 GoDaddy.com Bowl where it will face ill play Arkansas State with Hazell on the sideline.

Purdue will play Oklahoma State on Jan. 1 in the Heart of Dallas Bowl, and Burke has already installed receivers coach Patrick Higgins as interim coach for that game.

"I had two goals when I went to Kent State," Hazell explained. "One was to win a MAC championship, and the other was to go to a bowl game, so this is too big to miss."

Burke gave him his blessing, just as he did when he hired Joe Tiller more than a decade ago.

Hazell was rewarded for this season's success with the conference's coach of the year award and the instant visibility that made him a candidate at Purdue.

School officials would not confirm financial details of Hazell's contract, saying only that they would be made public at a later time. Some reports have said the deal is worth $12 million – a huge jump from the Big Ten-low $950,000 salary Danny Hope was earning before he was fired Nov. 25.

Burke insisted Hazell, now the first black football coach at Purdue and the fourth in Big Ten history, is worth it and offered to spend whatever it takes to find the best assistants, too.

"When you feel it's all coming together and you can close the deal, you close," Burke said. "That's what happened yesterday."

Hazell informed his staff of the decision early Wednesday morning, then met with his players briefly at about 6:30 a.m.

"I walked out of the (coaches) meeting and went to the players and said, `Hey, this is what happened, I love you and I walked out,'" Hazell said.

The toughest part will be juggling two jobs – bowl preparations at Kent State and recruiting for Purdue.

During a 40-minute news conference Wednesday evening, Hazell explained he wanted to make sure the 13 recruits who have already committed to Purdue would follow through on those plans and laid out a detailed day-by-day travel plan that included commuting from practices in northeastern Ohio to his new West Lafayette campus.

Burke made no secret of what he was seeking in a new coach – an offensive mind who could win right away and build enough support among the fan base to encourage fans to return to Ross-Ade Stadium. Attendance had declined from an average of roughly 54,000 in 2007 to 37,000 this past season.

"He (Tressel) just said this is the perfect spot for Darrell," Burke said. "He gets the work ethic and went on about a couple of other things. I just thought we wouldn't get the fan base excited if we line up and play like Wisconsin, you know, and he (Tressel) said, `You won't have any trouble with that, he was trying to get me to throw the ball all the time.'"

Players are excited, too.

"Any time you mention Ohio State football, you mention success and tradition and winning and he put Kent State on the map," quarterback Rob Henry said. "I have no reason to believe it won't be the same at Purdue."

Hazell wasn't the only name on Purdue fans' wish list.

Initially, there was support for Northern Illinois' Dave Doeren, who took his name out of consideration long before he accepted the North Carolina State job. Burke also brought Cincinnati coach Butch Jones to campus Sunday afternoon, the day after the Bearcats clinched a share of a second straight Big East title.

Burke said he first contacted Hazell through a conference call last Wednesday, but didn't meet with him in person until Monday because he didn't want to be a distraction from the MAC title game.

By Tuesday, Purdue made its decision. Gov. Mitch Daniels called Hazell on Tuesday night after he accepted the deal.

"He's very impressive on the phone as well as on paper. He seems to be a high-character person and he has a reputation for caring about the life success of his players and not just simply their success while passing through," said Daniels, who takes over as Purdue's president next month but was not involved in the search process. "Those are the kind of values we want Purdue to be successful with."

Hazell also has been an assistant at Rutgers, West Virginia, Army, Western Michigan, Penn, Eastern Illinois and Oberlin College in Ohio. He was a receiver at Muskinggum College and was inducted into the school's hall of fame in 1993.

And now, Burke thinks he has the right man to restore some luster to Purdue's proud program.

"I asked about the style play, and he said it doesn't matter what style of play I like to use, you have to come in first and evaluate the talent," Burke said. "He (Hazell) said at Purdue, you've been built for speed and there's something in your DNA a bout quarterbacks. So I pushed back a little bit, and I asked `Why I should buy into that statement. He said, `When I was at Ohio State, I was in charge of the receivers with Santonio Holmes and Ted Ginn Jr., and I was their advocate.' I liked that."