Dienhart: Give the Heisman to Johnny Football 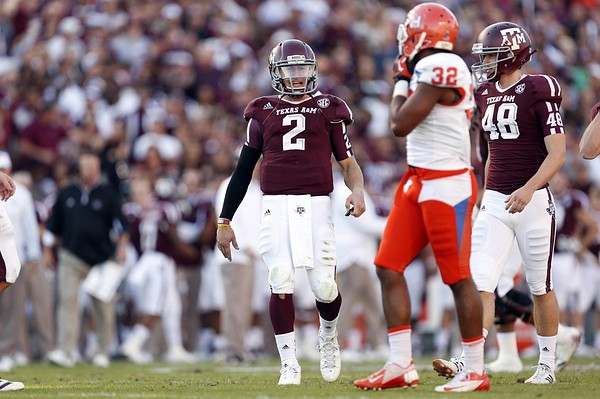 When it comes to Heisman races, this one is a yawner. And do you know why that?s funny? Because the 78th Heisman ceremony will be historic.

On Saturday night in New York City, we may see the first freshman win the honor in Texas A&M?s Johnny Manziel. We also could see the first true defensive player win it in Notre Dame?s Manti Te?o. (Kansas State?s Collin Klein is the other finalist, but he has no shot and is along for the ride. Enjoy it, kid. Bring a camera, too.)

I suspect the voting will be close between the two clear front-runners. In fact, it could be the closest Heisman race ever. The closest thus far was in 2009, when Alabama?s Mark Ingram finished a scant 28 points ahead of Stanford?s Toby Gerhart.

Still, despite all of that, I?m not jazzed up like I have been for other Heisman ceremonies of recent vintage. There seems to be a true ?superstar? quality missing from the field. There?s no Herschel Walker, no Bo Jackson, no Ricky Williams, no Carson Palmer, no Sam Bradford, no Tim Tebow, no RG3. But, again, there could be some drama.

Heisman voting is broken down into six regions: far west; mid-atlantic; midwest; northeast; south; southwest. I think Manziel could take the far west, south and southwest. Te?o figures to take the northeast, midwest and mid-atlantic. What will be the difference?

Some voters will backlash against the notion that a freshman never should win the Heisman. Many also felt a sophomore never should win it-then Tebow shattered that notion in 2007, which set off a three-year run of sophomore winners.

And any player from Notre Dame is polarizing. You either love or hate the Fighting Irish. But you never ignore them. If Te?o wins, he would be the first senior to take the honor since Ohio State?s Troy Smith in 2006.

I am not overly enthused by my choice of Manziel. It almost is by default, honestly. But no one else seemed like a better option when I pressed the button on my ballot.

Te?o? Was he truly a dominant defensive player? No. Not like Pitt?s Hugh Green was in 1980 or even Ndamukong Suh of Nebraska in 2009, among others. The only arguments I hear for Te?o go thusly: ?He?s the heart and soul of a great Fighting Irish defense on a Notre Dame team that is unbeaten and playing for the national title.?

That?s it? THAT makes him college football?s most outstanding player for 2012?

Not a chance. Te?o?s candidacy seems to be more sizzle than substance. Turn on the tape, show me something special–seven interceptions, 103 tackles, 11 passes broken up. There isn?t enough on Te?o?s resume to merit inclusion in this exclusive Heisman club.

I suspect Te?o?s candidacy is fueled by his emotional backstory-and that should have no bearing on the Heisman. But I?m sure it does.

Look, Te?o is very good, but he wasn?t a game-changer or difference maker who altered game plans. Heck, was he even the best linebacker in America in 2012? I tend to think Georgia?s Jarvis Jones was.

But, as with most things Notre Dame, hype takes over and ?legends? are built quickly.

Compare all of that to Manziel. Pop in the tape and watch this kid. The words that come to my mind reviewing clips are: game-changer ? difference-maker ? sensational ? special.

Manziel is coming off a historically great season in the nation?s best conference, the SEC. And he set a single-season SEC standard for total yards with 4,600. And, again, he did it in the big, bad SEC, home of the best players, best coaches, best tailgates, best cheerleaders and best defenses in the galaxy.

The fact Manziel did it as redshirt freshman makes his feats even more remarkable and enhances his resume. I flat-out guarantee that if Manziel was a senior-or played at Notre Dame–this race wouldn?t even be close.

And you want a signature, Heisman moment? None was bigger or better than Manziel waltzing into Tuscaloosa to play No. 1 Alabama and pantsing Nick Saban and his ferocious Crimson Tide defense. Last guy to do that was Cam Newton, whose single-season total offense record succumbed to Manziel.

Give the Heisman to Johnny Football.