Did You See This? Izzo addresses team at halftime 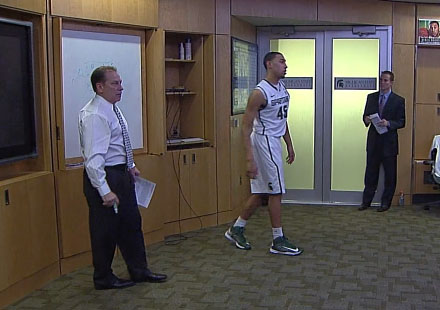 Ever wonder what it's like to be inside the locker room with Tom Izzo at the half? The legendary Michigan State coach gave BTN an all-access pass Wednesday night, and it didn't disappoint. Watch Izzo, he of six Final Four appearances and seven Big Ten titles, address his team in this video.

This is great stuff. And you'd never know Michigan State led Arkansas-Pine Bluff, 38-12, the way Izzo and his assistants challenged the players.

Here are some of Izzo's highlights:

"I think you too, Keith (Appling), need to be a little more aggressive."

"The rebounding, we did a heck of a job on the offensive glass; we had 10 of them. But we missed a lot of shots early. We were shooting about three percent early."

"Yeah, that's the only thing I'm still struggling with – why we're not ready to shoot. You all want to shoot.

"Guys, listen: Right now, I don't want anyone passing up open shots. Because if you're passing them up, then your mentality, you're not thinking shot."

"We're playing against the game now. Respect the game a little bit."

"We didn't score a lot of points. I want to score more points."