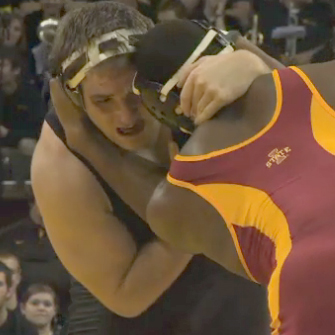 Don't box him in: Hawkeyesports.com did a nice story on heavyweight and outdoorsman Bobby Telford, who has opened the season with six consecutive victories, including a 3-2 decision against No. 15 Matt Gibson of Iowa State on Dec. 1. The first five bouts were devoid of drama: Telford won three by fall and another by 19-2 technical fall. Read more here.

Midlands alert: The 50th year of the Ken Kraft Midlands happens later this month in Evanston. For fans of wrestling history, this page has the entire history of brackets for every year of the event.

BTN/BTN2Go will have  live coverage of both the Midlands Championships. You can also get ticket information for the event, which runs Dec. 29-30.

Latest rankings: Nine Big Ten wrestling teams hold spots in the latest Top 25 Usa Today/NWCA/AWN rankings released Tuesday. Penn State owns the top spot ahead of top ten teams No. 3 Minnesota, No. 4 Ohio State, No. 5 Iowa, No. 6 Illinois and No. 9 Nebraska. Northwestern is No. 12, Michigan is No. 14, and Purdue is No. 21.

Given the recent news on Big Ten Conference expansion, it's fun to note that Maryland is currently ranked No. 17.

See the full Top 25 at NCAA.com. Individual rankings are over at theopenmat.com.

Twitter: Are you on Twitter? We've created a wrestling list to track the official accounts from Big Ten wrestling teams. It's all right here. Here's a story we were alerted to by the @Hawks_wrestling on Twitter. This is the first wrestling match for Jared Stevens at Sunset Middle School in Brentwood, TN. Jared has severe cerebral palsy but wanted to wrestle. Watch the video:

Doesn't get any better than this. Wrestling is a great sport. Jared Stevens' First Wrestling Match: http://t.co/mMh2Y9oO via @youtube

Penn State: GoPSUsports.com talks with defending NCAA champion David Taylor in the latest version of "This Week in Penn State Wrestling." See the YouTube video below: