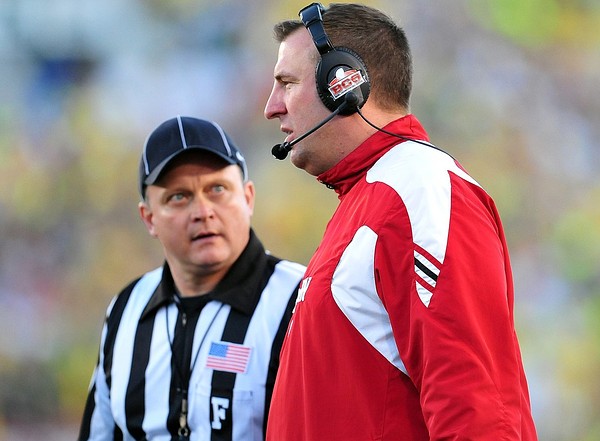 Time to open up the mail bag. And, as you would suspect, the bag was stuffed with questions about Bret Bielema?s shocking move from Wisconsin to Arkansas that still has the nation buzzing.

Read all about that-and more. And send me your latest questions and comments at the bottom of this post.

I think Bret Bielema is the first Big Ten head coach to leave for another job since Nick Saban bolted Michigan State for LSU in 1999. Why are some writers making it out like there's a mass exodus of coaches from the conference? – Jonathan

I can?t speak for the angles other writers take on stories. But, as you said, the Big Ten hasn?t lost a lot of coaches in recent years. Below is a look at each school?s head coaches since 1990 and how they left. As you can see, only four left directly for other jobs: Illinois? John Mackovic to Texas; Northwestern?s Gary Barnett to Colorado; Michigan State?s Nick Saban to LSU; Wisconsin?s Bret Bielema to Arkansas. Two died: Indiana?s Terry Hoeppner and Northwestern?s Randy Walker. Five retired: Wisconsin?s Barry Alvarez; Purdue?s Joe Tiller; Michigan?s Lloyd Carr; Iowa?s Hayden Fry; Nebraska?s Tom Osborne. All the others were fired.

Many people think that will be the first target of Wisconsin to replace Bret Bielema. Chryst has pledged his allegiance to Pitt, where the one-time Badger offensive coordinator has coached only one season. Still, some feel Wisconsin will push hard for Chryst, who is Pitt?s fourth coach since 2010. Could Chryst be the latest coach to bolt Pitt, which fired Dave Wannstedt and then went through Mike Haywood and Todd Graham before landing Chryst? Stay tuned. If not Chryst, Wisconsin could go for Pitt offensive coordinator Joe Rudolph, a former Badger assistant and offensive lineman, ex-Wisconsin quarterback Darrell Bevell now coordinating the Seahawks offense or Jaguars? defensive coordinator Mel Tucker, a one-time Badger defensive back.

Who will coach Wisconsin in the Rose Bowl? – Doug Mack

It won?t be Bret Bielema, obviously. And there doesn?t appear to be a logical choice on the staff. If so, it likely would be co-defensive coordinator Charlie Partridge or defensive coordinator Chris Ash. But the most likely candidate may be Barry Alvarez. Why not? He is the last Badger coach to win a Rose Bowl, guiding Wisconsin to a win over-ironically-Stanford after the 1999 season.

They only reason I can think of for Bret Bielema to take the Arkansas job over Wisconsin is money. There's no way Arkansas is a better job. – Andy

You are correct. Arkansas is a middle-of-the-pack job. No coach has even won an SEC title there since the Hogs joined in 1992. Finishing ahead of Alabama and LSU in your own division is daunting. But it is a new challenge for Bielema in the best league in America. And he may feel has done all he can at Wisconsin.

You may be correct about the Gamecocks winning, but I doubt the margin will be that big if South Carolina prevails. Still, it could be a rough postseason for the Big Ten. Last time I checked, the Big Ten was an underdog in all seven bowls. And the three biggest appear to be Purdue vs. Oklahoma State in the Heart of Dallas Bowl; Nebraska vs. Georgia in the Capital One Bowl; Minnesota vs. Texas Tech in the Meineke Car Care Bowl.

It could happen, if you listen to some people. I think it will happen-and sooner rather than later. And when the Big Ten does grow, I would suspect it will look south to schools like Georgia Tech, Duke, North Carolina and Virginia. I also have seen schools like Vanderbilt and Kansas mentioned as possible targets. I then would suspect the other four major conferences (Pac-12; Big 12; SEC) to follow suit and expand to 16, giving us four, 16-team conferences.

Purdue athletic director Morgan Burke wanted to hire a coach that would enhance Purdue?s reputation as the "Cradle of Quarterbacks." But Kent State is ranked last in passing yards per game in the MAC. Is this a good fit? – Brian Holmes

It is a good question, but don?t read too much into Kent State?s team stats. Hazell didn?t inherit the best roster and tried to build around what he had. And the personnel dictated establishing a ground game. It worked. Give the guy credit. At Purdue, Hazell will be able to recruit players built for more of a passing game. He is a bright mind and top recruiter who worked at Ohio State prior to going to Kent State, which he took to its first bowl since 1972.