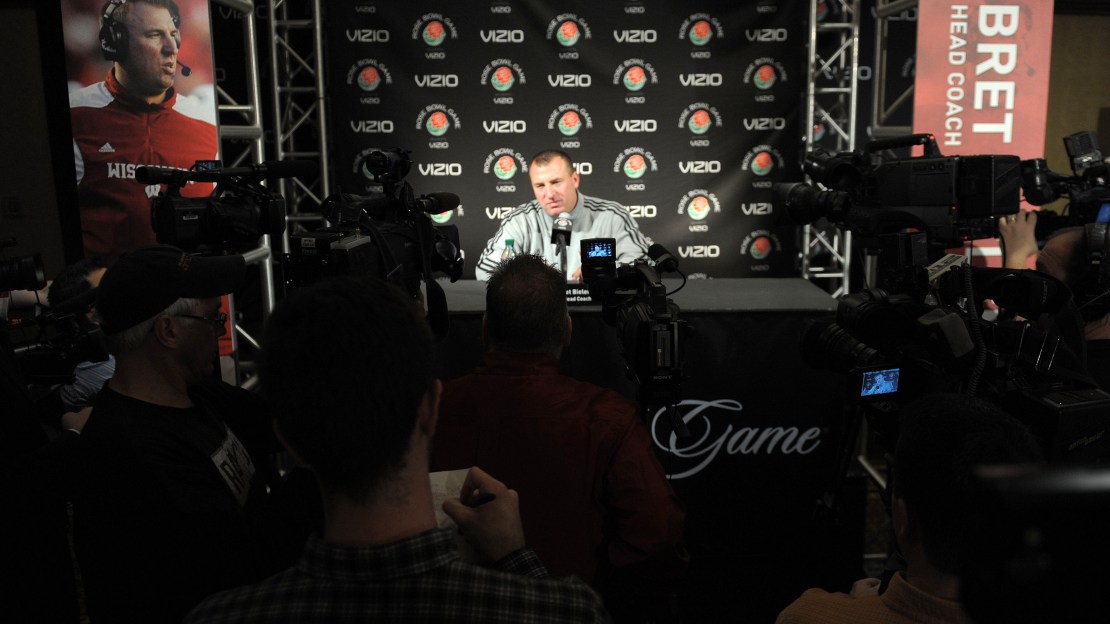 Tuesday's shocking announcement that Bret Bielema was leaving Wisconsin for Arkansas dominates today?s daily links as writers examine why he left and what it means. Plus, Purdue hired a coach and Minnesota lost a quarterback. Read it all in my daily links.

And let me know what you think via my mailbag, Twitter, or the comments section at the bottom of the post.

Doug Lesmerises of the Cleveland Plain Dealer says Ohio State has lost a great villain with Bielema?s departure. And that?s what makes sports great-rivalries and villains, someone or something to rally against. Nothing galvanizes a fan base more-or fuels a rivalry better.

David Jones of the Harrisburg Patriot-News says Bielema?s departure is another indicator of the SEC?s dominance over the Big Ten.

Jones says Bielema's emigration is an indicator that the SEC is where it's at if you want to really test your wings as a coach. Yes, Urban Meyer quit Florida and a year later landed at his dream job back home in Ohio, arguably the two biggest-name coaches in the SEC (if one discards South Carolina's aging Steve Spurrier) are both of Midwestern roots who settled at SEC schools — LSU's Les Miles and Alabama's Nick Saban.

And with Lloyd Carr's retirement in 2008, Jim Tressel's downfall in 2010 and Joe Paterno's death, Bielema remained the single thread to a successful past that the league retained. And now he has fled to a South about which he knows nothing and where he's never lived.

Pat Harty of the Iowa City Press-Citizen thinks Bielema?s departure may be rooted in the need for new challenges.

You know, Bielema may feel he?s done all he can do in Madison, having guided the Badgers to three Rose Bowls in a row. After seven seasons, it?s time for a new challenge. But Harty points out: One thing is certain about Bielema?s decision; it doesn?t look good for the Big Ten when the head coach at one of your top football program bolts for a middle-of-the-pack team in the SEC.

Shatel says football coaches get into the job race for a few reasons. One, hit the lottery. Two, they?re in a mid-level job in their league and want to go where they can win a championship. Three, they feel like they?ve done all they can where they are and fans will soon demand more or become tired of them (see Kirk Ferentz). With Bielema, Shatel is betting on No. 1 and 3. Three straight Rose Bowls is a tough act to follow for any coach, especially the coach who went to the Rose Bowls.

Michael Hunt of the Milwaukee Journal Sentinel wonders if Badgers fans are happy now that Bielema is gone.

People beefed about Bielema?s Xs and Os acumen, and they said he struggled in big games and was sometimes soft on discipline. On and on it went. Now, he?s gone. Be careful what you wish for, you may get it.

Tom Powers of the St. Paul Pioneer-Press notes Bielema?s move to the SEC will reunite him with ex-Minnesota coach Tim Brewster, who had-ahem–a bumpy relationship and is now an assistant with Mississippi State.

Flash back to 2010, when Brewster coached the Gophers, he was involved in a very famous incident at the end of a Minnesota-Wisconsin game. Up 41-16 with about six minutes left, Bielema's Badgers went for a two-point conversion. Brewster went ballistic during the postgame handshake. The TV cameras caught him giving Bielema a tongue lashing-. His language was, uh, colorful, and lip readers everywhere blushed. Bielema's excuse was that going for two was what "the card" said to do.

"Just tell him I said, 'Welcome to the SEC,' " Brewster told Powers with a laugh. "Tell him if he needs any insight, any insight at all, to give me a call."

In other Big Ten news ?

Staff changes? At Nebraska? Coming off a 10-3 season? Steve Sipple of the Lincoln Journal Star thinks that would be extreme.

Sipple says changes don?t make sense on a number of levels. Yes, the defense had issues at times in 2012, but the defense belongs to Bo Pelini, who gets help from coordinator John Papuchis. Is Pelini gonna can himself? And canning assistants doesn't make sense because if coaches at Nebraska keep getting fired after 10-3 seasons, well, good luck finding high-grade replacements. Good coaches will gladly go places where a 10-3 record doesn't get them a pink slip.

Michigan?s Denard Robinson will conclude his career in his home state of Florida playing in the Outback Bowl. But he likely won?t play the position he came to Ann Arbor to play: quarterback.

Rather, he figures to fill a utility role at receiver/running back/quarterback he has played since hurting his elbow at Nebraska in October. And that may just help enhance his NFL stock.

"Hopefully, it does," he told Kyle Meinke of Mlive.com. "Getting on the field is automatically going to help you. If you're making plays, you can't hide that. You can't hide a playmaker."

Minnesota sophomore quarterback Max Shortell has opted to transfer. No shock there. The emergence of Philip Nelson as a true freshman in the back half of the season seems to cement him as the Gophers? starter for the next three seasons.

I wrote a few wks ago why Bo/Arkansas made some sense. But there was no way they could hire him after giving up 70. Fan base woulda revolted

My take: Yes, that would have been a tough introduction.

I have been stunned by many things that have come out of Bret Bielema's mouth over the years, but this is beyond shocking. Arkansas?

My take: I think this sums up everyone?s thoughts.

Hazell was great to work with when he was at Ohio State. Terry Robiskie raved about work he did with OSU WRs, too

My take: Sounds like Purdue got a good coach.

My take: This, ladies and gentlemen, is amazing.