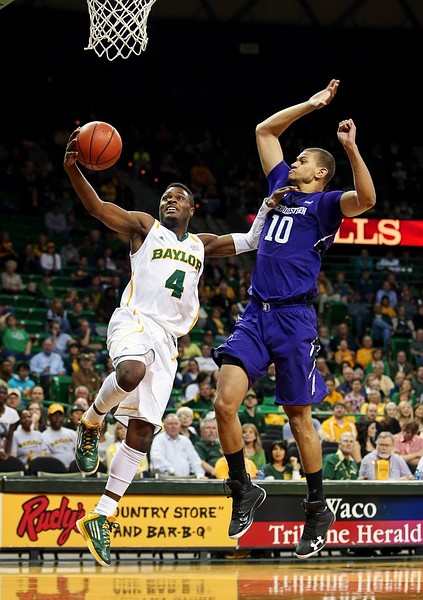 It?s been a bit of a quiet week for Big Ten basketball, with most teams facing tune-up games against over-matched opponents. Let?s take a quick look at the games that weren't complete blowouts.

Northwestern jumped out to a shocking big lead at Baylor, thanks primarily to defense. After a first half in which both teams scored efficiently, the Bears scored just one point in the opening seven minutes of the second half. By the time Baylor's offense recovered, Northwestern had an 18-point lead and some serious swagger, as evidenced by a Drew Crawford technical for hanging on the rim.

Defense? Taunting techs? Is this Northwestern we are talking about?

Down the stretch, Baylor's mounting defensive pressure nearly caused the Wildcats to give the game away. It was a one-possession contest with under a minute remaining before Northwestern closed it out at the foul stripe. After watching that finish, it?s hard to see how any team with some athleticism wouldn't want to press Northwestern, as Bill Carmody?s team doesn't have great ball-handlers and can struggle a bit at the foul line.

Still, this is a huge road win for Northwestern. Baylor just beat Kentucky in Rupp and will likely end up a tournament team. This win helps cancel out the bad loss to Illinois-Chicago and puts Northwestern back on track for an at-large worthy non-conference resume, though home wins against Butler and Stanford are mandatory. The next two-and-a-half weeks are very big for Carmody.

For the victory, the Wildcats can thank, of all things, a healthy rebounding advantage. This Northwestern squad has made a surprising turnaround on the defensive glass, and it?s been a major factor in the overall improvement of the defense. New additions Jared Swopshire and Alex Olah are making big contributions on the defensive glass. If the Wildcats can get things figured out on the offensive end, they might have something going here (who would have ever guessed we?d say that?).

Illinois struggled a bit against a bad Western Carolina team, but the main source of the close margin was simple–the Illini didn?t shoot well. After making threes at a 35 percent or better clip in each of the season?s first eight games, Illinois shot them at 29 percent against Western Carolina. This was easily Illinois? worst shooting game of the season.

When your shots aren?t falling, you have to find other ways to get it done, and the Illini did just that. Through a combination of offensive rebounds and a low turnover rate, Illinois hoisted 65 shots on 66 possessions. With that many looks, a team doesn?t have to shoot all that well to score efficiently.

An optimist would say that the Illini got some of their reversion to the mean out of the way without losing. A pessimist would see the close margin against a bad team and start to worry. Either way, Illinois is 9-0 heading into a very tough game at Gonzaga this Saturday. With the way the Zags have been playing, the Illini will need every bit of hot shooting they can muster to come away from Spokane with a win.

On Monday, Nebraska put up an nice effort against a USC team that might just be a lot worse than everyone expected. Both offenses were sluggish until Ray Gallegos got going. The redshirt junior went scoreless over the first 16 minutes but then erupted for 20 points over the final 24 minutes to lead the Huskers to a surprisingly easy victory.

Gallegos is now third among Big Ten players in both three point attempts and makes, and he?s shooting 42 percent from deep. This, coming from a player that shot 25 percent on threes over his two prior seasons, is an amazing turnaround indeed. Long live the developmental redshirt.

Elsewhere around the conference, the week has been blowout city. Most notable was Minnesota?s 24-point thumping of South Dakota State, a solid team that was unfortunately without outstanding point guard Nate Wolters (and it showed). The Gophers continue to impress and are now a top-10 team according to KenPom. Trevor Mbakwe nearly managed a double-double in just 14 minutes of court time.

The rest of the week brings a lighter but potentially more competitive slate. Tonight, Penn State faces a solid LaSalle squad at the Palestra, while Michigan State tunes up with Arkansas Pine Bluff. Tomorrow, Nebraska gets a chance to really grab some attention as it hosts Creighton, then Friday brings a big game for Iowa as it hosts Iowa State. With all the geographical closeness involved in these match-ups, we should see some real competition.