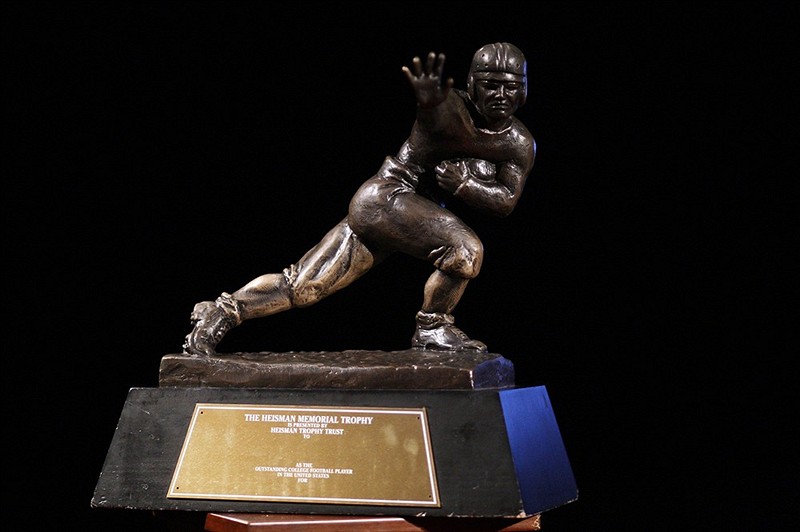 The Heisman Trophy announced the finalist for the greatest individual trophy in sports: Texas A&M?s Johnny Manziel, Notre Dame?s Manti Te?o,  Kansas State?s Collin Klein, and … that's it. No Braxton Miller. Read about that and other top Big Ten grid news in my daily links.

I was a bit shocked. I thought Miller deserved to at least get an invite to New York for the ceremony. He was by far the top player on a 12-0 team. But, in the end, I guess his numbers weren?t gaudy enough. And his last two games (at Wisconsin and vs. Michigan) weren?t great. Regardless, Miller is just a sophomore and figures to be a top Heisman contender in 2013 for a Buckeyes squad that should be a top 5 preseason team.

Who is the top walk-on in the United State of America? Why, it?s none other than Penn State quarterback Matt McGloin!

McGloin recently walked away with the ?Burlsworth Trophy,? named for a former Arkansas guard who tragically died in a car crash. Good choice. McGloin set school records for yards passing (3,266) and touchdowns (24) in a season. He also holds the Penn State mark for career passing touchdowns (46). Not bad for a guy whose only scholarship coming out of high school was from ? Lehigh.

Speaking of Penn State, if the Nittany Lions were bowl eligible, what bowl would they have been selected to? Hmm. I think maybe the Outback or Gator. No worse than the Buffalo Wild Wings Bowl, right?

Here is what the Cornhusker icon told the great Tom Shatel of the Omaha World-Herald:

?We did the same thing to Florida in 1995. The next year, Steve Spurrier won the national championship. Sometimes a game like that can be instructional. It can end up helping you. But right now, it seems like the sky is falling.?

After the Gators lost, Spurrier hired a guy named Bob Stoops to be his defensive coordinator. Well, you know the rest of the story.

Michigan State coach Mark Dantonio has hinted about offensive changes. And one of them could be to have quarterback Andrew Maxwell run more.

But, is that REALLY what Maxwell?s strengths are? He is more of a pocket passer and a pro-style signal-caller. Stay tuned. But something must be done to spark a Spartan offense that struggled all of 2012.

The good folks at USA Today have ranked all 124 FBS schools. Where did yours end up?

On the subject of ranking, Athlon?s has ranked all 35-yes, 35-bowls. By the way: That?s 70 teams in the postseason-and there are 124 in FBS. That means 56 percent of the schools make a bowl. Pretty exclusive, huh?

This will be Wisconsin?s third consecutive trip to the Rose Bowl. Is it getting to be old hat? Is the excitement gone from the fan base? You know: Been there, done that. Yawn.

Dan Simmons of the Wisconsin State Journal says it?s a question facing many Wisconsin fans, who so far have appeared a bit tepid in booking tickets to Pasadena.

Big Ten expansion talk continues to bubble after the conference added Maryland and Rutgers to grow to 14 teams. Will the league add two more to get to 16? If so, Bryce Miller of the Des Moines Register thinks the Big Ten will look south. And, he?s probably right.

[RELATED: Take our Big Ten expansion survey and voice your opinion on the Big Ten's future. ]

Miller says any schools under consideration must meet two basic criteria: Be members of the Association of American Universities (AAU) and be able to expand the Big Ten?s TV footprint into new markets. Which schools fit that, according to Miller? Georgia Tech. North Carolina. They make the most sense. Bottom line: stay tuned.

Heisman people ask us not to reveal names on our 3-man ballots, but rest assured @M_Ball28 was on mine. Overcame a lot to have great season.

My take: No doubt, Ball did overcome a lot going back to that Aug. 1 concussion. I had my doubts that he?d have a big season. He proved me wrong.

My take: Anyone shocked by this?

McGloin has always disliked when people referred to him as former walk-on, but there's no denying he came light years as a QB. Good for him.

My take: C?mon! Embrace your past!