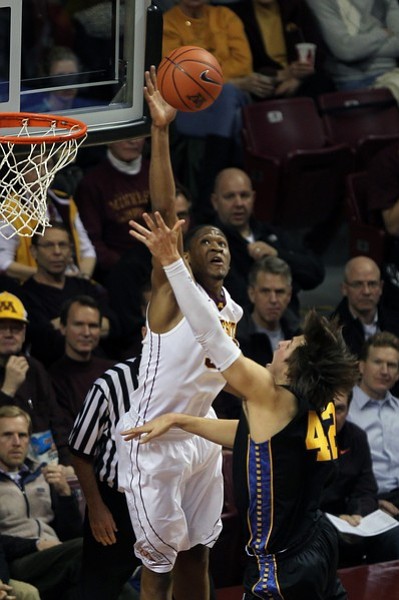 Andre Hollins scored 20 of his 22 points before halftime, and No. 14 Minnesota breezed to an 88-64 victory on Tuesday over a South Dakota State team missing point guard Nate Wolters. Hollins swished his first six 3-point attempts and finished 8 for 9 from the field for the Gophers (9-1), who reached their highest ranking in the Associated Press poll this week in six years under coach Tubby Smith.

Austin Hollins had 17 points, five assists and four steals, Joe Coleman added 15 points and seven rebounds and the Gophers did most of their damage on the perimeter and the fast break to notch their largest winning margin this season.

FINAL: Andre Hollins scored 22 points and Joe Coleman added 15 points and seven boards as they teamed up to lead No. 21 Minnesota to an 88-64 victory over South Dakota State on Tuesday at Williams Arena in Minneapolis. Minnesota (9-1) hit 57 percent of its field goals (33-of-58). The Golden Gophers were hot from long range, hitting 10-of-22 threes for a 45 percent night from beyond the arc. Minnesota gave itself second chances during the game, snatching nine offensive rebounds.

HALFTIME: Andre Hollins hit 6-of-7 3-pointers and scored 20 points to lead No. 21 Minnesota to a 48-24 halftime lead over South Dakota State. Joe Coleman had a strong first half, too, with nine points, five rebounds and a 4-of-5 performance from the field. The Golden Gophers didn't trail once in the first half and led by as many as 24 points. The game was tied at 10 before the Jackrabbits went into a funk, going the next 3:32 without scoring, and allowing Minnesota to take a 20-10 lead in the first.