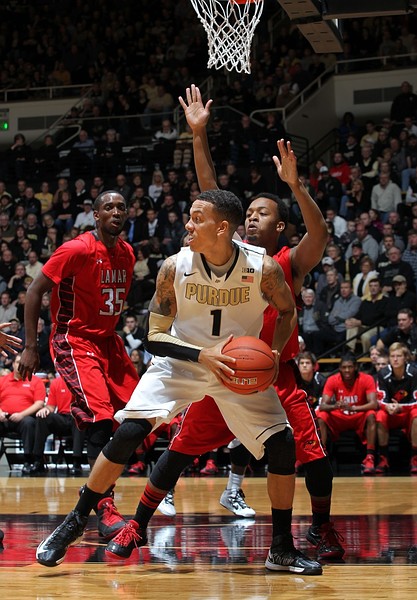 Terone Johnson scored 16 points and A.J. Hammons added 13 as Purdue routed Lamar 72-39 on Tuesday night. The win allowed the young Boilermakers to climb back to .500 after Saturday's rare nonconference home loss to Xavier.

Ronnie Johnson lays it up in transition:

FINAL: Purdue's defense shut down Lamar, as the Boilermakers defeated the Cardinals 72-39 on Tuesday at Mackey Arena in West Lafayette. Purdue (4-4) held Lamar (1-7) to 30 percent shooting from the field. Terone Johnson scored 16 points,  A.J. Hammons added 13 on 6-of-10 from the field and Anthony Johnson chipped in 11. Not only did the Boilermakers go to the line 14 more times than did Lamar, they made the most of their opportunities, converting 12-of-21. The Cardinals committed 14 fouls and made 3-of-7 free throw attempts.

HALFTIME: There were no free points for Lamar, as Purdue clamped down defensively to hold the Cardinals to 30 percent shooting in the first half and has a 36-17 lead going into the break. The Boilermakers were leading 11-8 when they used an 8-0 spurt to widen their advantage to an 11-point margin. Eight Purdue players scored in the first half. Terone Johnson is putting together a nice game so far for Purdue. The junior has nine points. Amos Wilson led the way for Lamar in the first half, with six points.