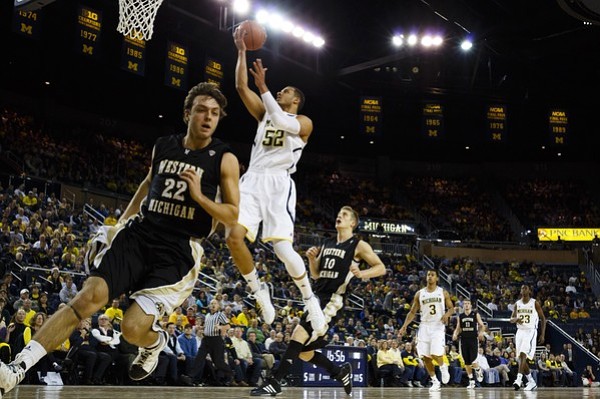 Trey Burke had 20 points and seven assists, and No. 3 Michigan eased past Western Michigan for a 73-41 victory Tuesday night. The Wolverines (8-0) had actually lost their previous two games against the Broncos, but that was more than a decade ago.

Western Michigan (6-2) had won six straight coming into this game, including a victory over South Florida, but the Broncos wasted a chance to stay in the game with the Wolverines, turning the ball over 13 times in the first half.

FINAL: Trey Burke scored 20 points, grabbed three rebounds and handed out seven assists to help No. 3 Michigan past Western Michigan 73-41 on Tuesday at Crisler Center in Ann Arbor. Michigan (8-0) held Western Michigan (6-2) to 29 percent shooting from the field and grabbed 26 defensive rebounds, while only allowing 10 offensive rebounds. Mitch McGary was 5-of-5 from the floor and chipped in 10 points for the Wolverines. Michigan hit 50 percent of its field goals (29-of-58). The Wolverines were hot from long range, hitting 8-of-21 threes for a 38 percent night from beyond the arc. Michigan also got a double-digit effort from Nik Stauskas, who scored 11.

HALFTIME: Trey Burke has 10 points to lead No. 3 Michigan to a 35-21 lead over Western Michigan at the end of the first half. The Wolverines led by as many as 18 points in the first half and never trailed. Michigan was leading 20-15 when it used a 10-0 spurt to widen its advantage to a 15-point margin. Michigan got points from seven different players. The long-distance game has been bottled up for the Broncos, who made 1-of-9 from beyond the arc in the first half, while shooting 54 percent (7-of-13) on two-point shots.