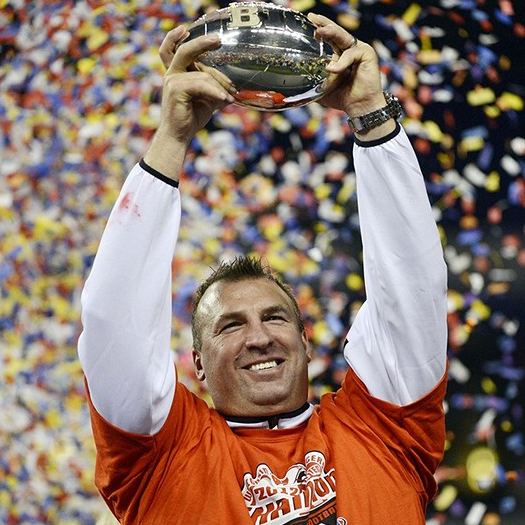 Bielema, who will be introduced Wednesday, led the Badgers to a 70-31 win over Nebraska in Saturday night's Big Ten title game at Lucas Oil Stadium. With the win, the Badgers became the first Big Ten team to reach Pasadena three consecutive seasons since Michigan from 1976-78.

But Bielema is off to a new challenge in Fayetteville, where he will take over for interim coach John L. Smith.

Bielema went 68-24 in seven seasons in Madison with a 37-19 Big Ten mark. He led the Badgers to bowls each season after taking over for Barry Alvarez in 2006. Read Alvarez's statement on Bielema's move.

Bielema has no connections to the SEC, as he played at Iowa. He also began his coaching career in Iowa City before working at Kansas State and then Wisconsin.

What direction does Wisconsin go? It?s anyone?s guess at this point. This is one of the nation?s marquee jobs and figures to attract a lot of interest from around the nation, as Bielema has helped make Wisconsin one of the better jobs in the nation.

What do you think about this news? Drop me a note below.