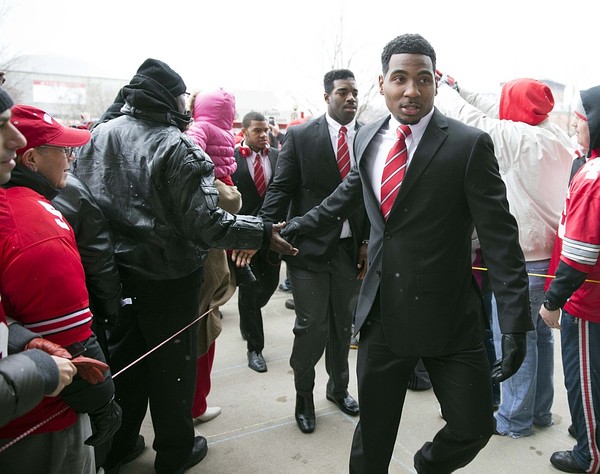 The finalists for the 2012 Heisman Trophy were announced Monday night, and there are a couple surprises: 1. The list includes only three players; and 2. neither Braxton Miller nor Montee Ball received an invite. No. 1 is the real shocker, however, considering there have been five finalists two of the past three years. The last time there were three: 2008.

Did Miller or Ball deserve an invite? Sure. And if there were four or five candidates, one of them would likely be New York bound.

Check out what Big Ten fans wrote on Twitter in response to the finalists:

@BigTenNetwork if they weren't going to win, better not to have them there, wasting time.

@BigTenNetwork Miller wasn't even best QB in his conference. Ball good but not among these 3.

@BigTenNetwork Braxton Miller should be going!! We need to get these old senile people out of control of these awards!!

@BigTenNetwork surprised! What r they grading on?

@BigTenNetwork no ball no fair #onwisconsin

@BigTenNetwork Really? Ball was so inconsistent this year. Wish they invited 5 every year, though.

@BigTenNetwork Disappointed but not surprise. Maybe if Wisconsin had better record and the Buckeyes perfect season meant something

@BigTenNetwork Miller should have gotten an invite. Don't think Ball is as big a deal.

@BigTenNetwork didn't surprise me too much. #Badgers couldn't put together a solid season. But I'm still smellin' roses! #rosebowl2013

@BigTenNetwork both should be there, but Manziel should win it. #JohnnyFootball

@BigTenNetwork no problem with Miller not being there. Te'o completely undeserving of award

@BigTenNetwork all three are better than Miller or Ball. no objections.