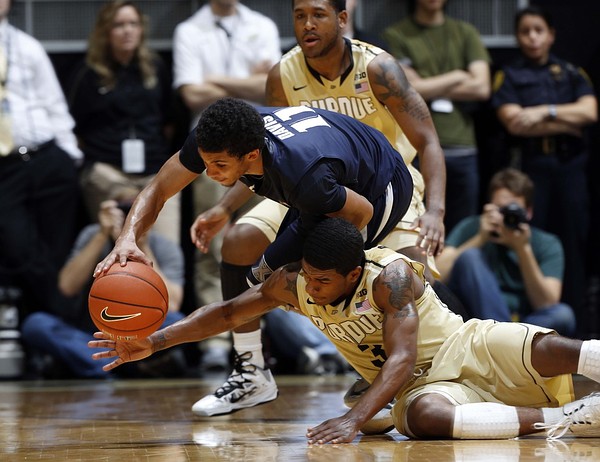 Purdue isn?t used to this. Under Matt Painter, only once have we seen the Boilermakers struggle, and that was in Painter?s understandably rebuidling 2005-06 season, which managed only a 9-19 record in the wake of Carl Landry?s knee injury that kept him off the court for the majority of the season. Since then, Purdue has won no fewer than 22 games a season. It didn?t matter if the team was relying on freshmen, whether it was short, or whether key players were lost to injuries. Painter somehow kept the whole thing going.

So I understand why other prognosticators had trouble moving the Boilers too far downward in the preseason standings. It?s a jarring thing to do. But after another home court loss, I think it?s fair to say that this year will be different than the previous six in West Lafayette. Even now, there?s talk of Purdue now facing a future on the bubble, but I think the more accurate account is that would be an upset for the Boilermakers to be in that position come March.

Sure, there are some things that will even out. Despite the fact that Purdue only has one proven outside shooter (while Terone Johnson is sporting a nice percentage, we?re talking about someone that shot under 50 percent from the free throw line last season), surely the team will improve on its current 25 percent mark from three-point range. And although Painter did not schedule a murderer?s row of a non-conference slate, the Boilers? path thus far has been above-average in terms of difficulty. But make no mistake-while Purdue will shoot better going forward, this is not a good outside shooting team. The offense has two go-to moves: D.J. Byrd spotting up on the perimeter, and Terone Johnson drives from the left elbow. Further, the schedule isn?t going to get any easier once conference play hits. Short of A.J. Hammons transforming into a reliable low post scorer, I don?t see how this team is in a position to secure an NCAA bid come March.

Also likely hoping for relevance from Jerry Palm will be Northwestern. After opening with six straight wins-including an overtime victory over an Illinois State team that nearly pulled off an upset at Louisville (in other words, ISU is not half bad)-the Wildcats have lost two straight at home. The first of which, against Maryland, is entirely excusable. The Terrapins are 6-1 so far, with the only blemish being a 3-point loss to Kentucky. Mark Turgeon appears to have all the makings of a high caliber Big Ten coach. But the Wildcats also dropped a game to Illinois-Chicago. UIC is now 6-1, with the only loss being a neutral court game against New Mexico, but this team also went 8-22 last season. It would be quite the turnaround if they were tournament-worthy this season.

Curiously, Northwestern?s offense has yet to round into Carmody shape this season. While the defense is reliably forgiving, the Cats? offense is usually at least respectable, and often much better. This year, it?s just not quite there. It?s the same perimeter-oriented system, which still rides three-pointers and low turnovers to overcome a dearth of free throws and offensive rebounds, but it?s just not quite as good as usual. The turnovers are just a bit too high, and not as many three-pointers are finding their way into the net. The Wildcats will have quite an opportunity to prove me wrong tomorrow against Baylor in Waco, however. Win that one, and I?ll change my tune.

Also of note, Wisconsin demolished a previously-unbeaten Cal team at home, ensuring a future showdown between Pomeroy?s laptop and everyone else.

This week, Nebraska hosts USC tonight and Creighton on Thursday, Northwestern visits Baylor tomorrow, and Iowa faces in-state rival Iowa State on Friday. ISU coach Fred Hoiberg has the Fighting Transfers again playing well this season, so a win could look very good on Iowa?s resume at the end of the season.