Minnesota runs away with 87-59 win 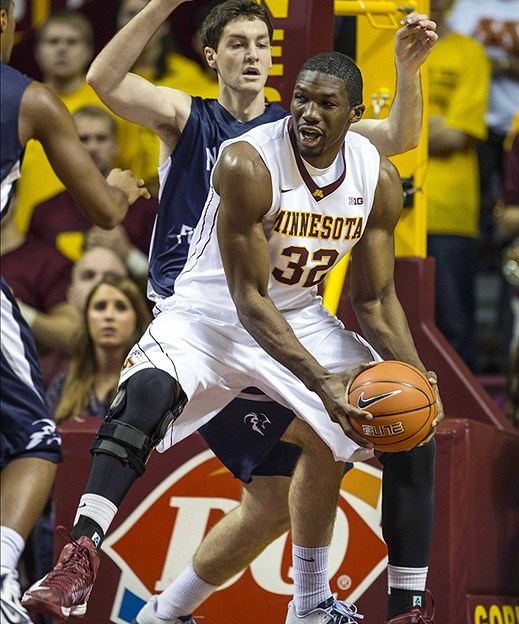 Rodney Williams with 15 points and eight rebounds as No. 21 Minnesota topped North Florida 87-59 Saturday. Williams all but three of his points in the second half and Austin Hollins added 12 points for the Gophers (8-1), winners of four straight.

The Golden Gophers went into the locker room with the momentum and came out of the second half flying as well. Leading 30-27 with 1:49 left in the first half, Minnesota used a 21-6 spurt to open its cushion to 18 points with 14:08 in the game.

Even in defeat, Travis Wallace came through for North Florida (3-5) with 17 points, six rebounds, and 7-of-10 shooting from the field.

Rodney Williams Jr. sparked the Golden Gophers, as he contributed 15 points, hauled in seven rebounds, and dished out four assists in the win. Trevor Mbakwe had a quality shooting game, nailing 4-of-5 shots from the field and scoring 11 points. More Minnesota scoring came from Maurice Walker, who scored 11 and Austin Hollins, who scored 12.

The Ospreys shot just 36 percent from the field (20-of-56). North Florida also got a solid contribution from Parker Smith, who scored 22.

Winning the battle on the boards was crucial for Minnesota as it grabbed 40 rebounds to 29 for the Ospreys. Not only did the Golden Gophers go to the line 10 more times than did North Florida, they made the most of their opportunities, converting 20-of-25. Those free throws came courtesy of 20 fouls committed by the Ospreys who were 12-of-15 from the line.

HALFTIME: Minnesota went on a 7-0 run to close the first half on a high note and leads North Florida 37-27.

Trailing 21-15, the Golden Gophers used a 15-0 run to blow past the Ospreys and take a nine-point lead.

Minnesota goes into the break with the offensive rebounding advantage, with 12 to North Florida's six. Eight Minnesota players scored in the half.

The Ospreys moved the ball in the first half, accounting for eight assists on 10 field goals.

Trevor Mbakwe is putting together a nice game so far for Minnesota. The senior has 11 points and four rebounds. Travis Wallace led the way for North Florida in the first half, with 10 points.