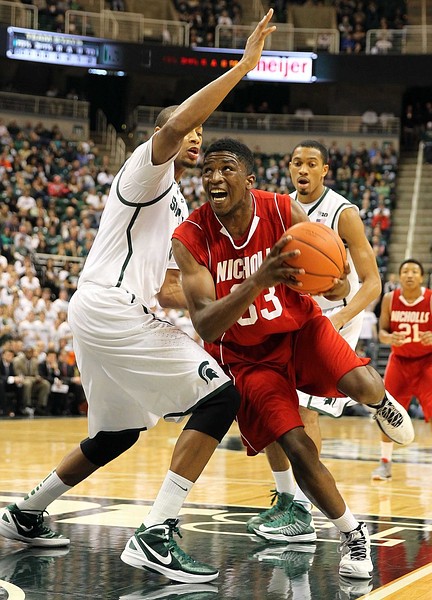 Keith Appling scored 13 points and No. 14 Michigan State used a big run in the first half to romp past undermanned Nicholls State 84-39 Saturday. Michigan State (6-2) led 10-9 eight minutes into the game before outscoring the Colonels 27-4 during the rest of the opening half.

Michigan State (6-2) hit 59 percent of its field goals (33-of-56). The Spartans gave themselves second chances during the game, snatching 10 offensive rebounds.

Michigan State held Nicholls (1-3) to 29 percent shooting from the field and hauled in 30 defensive boards, while only allowing six offensive rebounds.

Adreian Payne carried the offensive load for the Spartans, finishing with 10 points, 11 rebounds, and 4-of-5 shooting from the field.

Michigan State also got solid contributions from Keith Appling, who scored 13 and Denzel Valentine and Gary Harris, who each scored 11.

Ball movement led to nine assists on its 15 baskets for the Colonels. Nicholls got double-figure scoring from T.J. Carpenter, who scored 11.

Winning the rebounding battle was a key to victory for the Spartans as they outrebounded the Colonels 40-21. Michigan State never trailed in the game. The Spartans' largest lead was 46, which came with 27 seconds remaining. Free throws played a key role in the outcome, as Michigan State not only went to the line 13 more times than Nicholls, but made the most of its opportunities, shooting 13-of-23. Those free throws came courtesy of 17 fouls committed by the Colonels who were 5-of-10 from the line.

The Colonels trailed 10-9 before allowing Michigan State to go on a 27-4 run to close the half.

The Spartans never trailed in the first half and led by as many as 24 points. Nicholls went into a funk with the score 20-13, going 6:11 without a point while Michigan State went on a 17-0 run to open up a 24-point lead.

The Spartans made 15 of 24 two-point shots in the first half, but shot 1-of-5 from beyond the arc. Michigan State got points from seven different players.

The Colonels racked up three assists on five baskets. Michigan State's Denzel Valentine already has nine points and three rebounds. Sterling Bailey is putting together a nice game so far for Nicholls. The sophomore has five points.