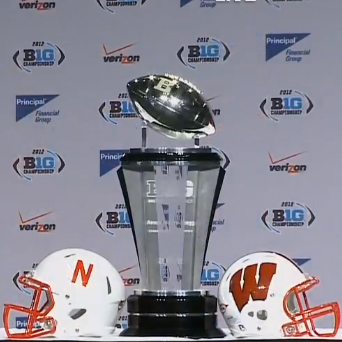 Every week this season, BTN.com's Brent Yarina (@BTNBrentYarina) and Tom Dienhart (@BTNTomDienhart) have offered their predictions for each Big Ten football game and provided polls for fans to pick their winners. We're doing the same for the Big Ten title game and bowl season.

Heading into the title game, BTN.com fans are atop the season standings. Congrats! You are two games ahead of Dienhart and six in front of Yarina. See our title game predictions and choose your winner in this post.

Tom's pick: Nebraska, 35-33 – Like last year?s game, this figures to be a back-and-forth affair. Each team will be able to run the football. The difference will be the quarterbacks. Taylor Martinez will make more plays than Curt Phillips, whose lack of big-game experience will shine through.

Brent's pick: Nebraska, 31-20 – Simply put, Nebraska's offense boasts too many playmakers, from Taylor Martinez to one of the conference's deepest collections of running backs and wide receivers. Plus, its defense isn't too shabby, either.

Now, it's your turn.

Wisconsin coach Bret Bielema understands a lot of people believe his Badgers don't deserve to be playing in the Big Ten championship game. Asked if he's insulted by the sentiment, he says he's not.

"I appreciate the question and understand it totally," he said Sunday. "I think there are 10 teams out there in the Big Ten that would love to be in the position Nebraska and we're in right now. When the two teams take the field on Saturday, neither is going to care how the other team got there or what their record is."

And Nebraska coach Bo Pelini said he doesn't buy that some of the luster is off the Big Ten championship game because unbeaten Ohio State, which finished first in the Leaders, won't be there.

"I don't really care what people say about that," he said. "Wisconsin is there because they deserve to be there. (Ohio State's) not there for a reason. That's not taking anything away from Urban Meyer or the kids who played at Ohio State and played their tails off, but there's a reason they're not there."