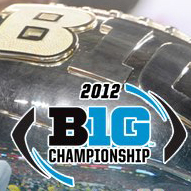 Tune into BTN/BTN2Go and BTN.com leading up to the and through Saturday's Big Ten Football Championship for extensive coverage from Indianapolis this weekend. Join BTN.com senior writer Tom Dienhart and BTN.com editor Brent Yarina for a live blog from the press box. In addition to their analysis and observations we'll be adding selected in-game highlights, photos, tweets and quarterly game stories.

In the video clip in this post, our panel answers the question, "What at stake for the Big Ten in this championship game?" What do you think? Tell us in he comments below.

[RELATED: Read Tom Dienhart's examination of the matchups within the title game. ]

Game day coverage begins live from Fan Fest with Revsine, DiNardo, Griffith and Mason on #BTNLive at 11 a.m..  The same four return just hours before kick-off from Lucas Oil Stadium with the Big Ten Championship Pregame Show at 6:30 p.m. leading right into FOX Sports? pregame coverage. And after the game, get extensive analysis, highlights and on-field interviews, too.

We roll right into the bowl announcements on Sunday with the Big Ten Bowl Selection Special at 9 p.m. ET. Revsine hosts with DiNardo and Griffith to preview each Big Ten bowl matchup. Select coaches also will be interviewed during the 60-minute program, which airs live from the Chicago studio.