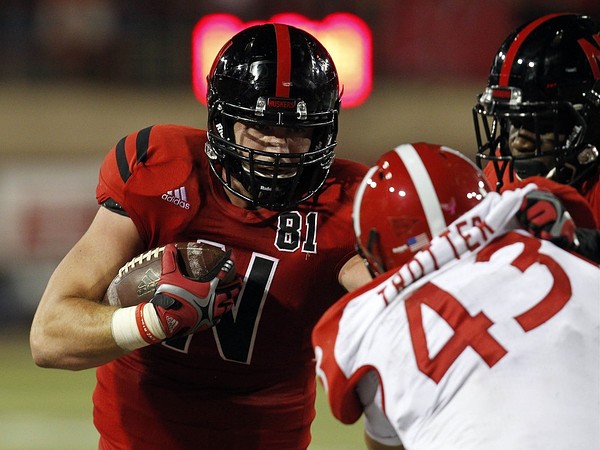 The Big Ten title game is almost upon us, and who better to break down Nebraska and Wisconsin than coordinators from other Big Ten schools? I dialed up six Big Ten coordinators from both sides of the ball and talked off the record with the guys who watched film, prepared game plans and stared down each team on a Saturday this fall. I asked them for their frank, candid and unvarnished analysis of each team.

Here is a collection of what they told me about each team.

Nebraska has the secondary to press you in coverage. They have the physical safeties and the corners that gave us a lot of issues. ? The area we hoped to get Nebraska was in play-action because they commit those safeties and linebackers to the run so much. If you run downhill on Nebraska, the linebackers and safeties can get lost a lot, so you are able to get fullbacks and tight ends in some spots and get them open. But against us, they didn't have to play the safeties down to stop the run because we couldn't get the run established vs. them. Wisconsin may be able to do that. ?

The Nebraska safeties and linebackers will have to be involved in stopping the run, and then Wisconsin can come back with play-action. That?s hard for a defense that commits to stopping the run to deal with. That?s an area Wisconsin has to be licking its chops over because of how aggressive Nebraska is. ? (Nebraska offensive coordinator) Tim Beck has done a tremendous job of running that offense. They changed in the last two years. They are smart with how they go about running the offense. They will look to the sideline and get themselves in a good play. That?s smart offensive football. They have the power game, where they will run the power toss and try to pound you. The next play, they are running a zone-read keeper with a tight end blocking the safety and getting after you with that 11th man, the quarterback. ?

I think (Taylor) Martinez is really good. He is as fast as can be and he really got us a couple of times. I think Nebraska is a lot harder to defend (than Wisconsin). ? How do you stop Nebraska? You have to be very disciplined. We overemphasized something going into our game with them and they didn?t do it, which hurt us on one of (Martinez?s) big runs. Regardless of how bad people think he is throwing the ball, he can make throws and he runs that offense. There is a reason why they are the No.1 offense in the Big Ten. ? I thought they had the best receivers we saw all year. Kenny Bell is really good.

We had more respect for their receivers than any others in the Big Ten. ? (Ameer) Abdullah is a good player. I wouldn?t be surprised to him and (Rex) Burkhead both in there at the same time. ? I probably underestimated Wisconsin?s (defensive) front and probably overestimated Nebraska?s front. I think we pushed around Nebraska up front, which was good. ?

If you don?t have a tight end in the game or attached to the formation, (the Nebraska defense) is going to play with one linebacker in the box and expect the safeties to come make plays. But their safeties didn?t trigger. Nebraska has better corners than Wisconsin. But I thought Wisconsin?s linebackers were really good. ? They blitzed us zero times on first and second downs.

They said: We are going to play our ?quarters? coverage and try to make it hard for your offensive linemen to get up the field to the second level and we are going to run like heck at linebacker and safety. If I had to do it over again, I probably would have taken more play-action shots over the top of the safeties? heads as they were screaming down (to play the run).

We all felt (linebacker Chris) Borland was the best defensive player in the conference, productivity, being around the football. You talk about having to game plan for a kid. You always had to know where he was on the field. ? Their linebackers are some of the best in the league. I thought 44 (Borland) and 53 (Taylor) were two of the best in the league. I think they are SEC-caliber linebackers. But if you get them spread out, it brings them back to earth a bit. We put the tight end in the boundary and had ?trips? on the ?field? side and that got everyone but Mike Taylor out of the box. That left you with about a five-man box with Borland trying to figure if you were gonna throw the bubble, run the power-read to the edge or if you were gonna run up inside. That?s where we had some success, getting those linebackers spread out. ?

Their front four is good. But those linebackers make them right a lot of the times. Our plan was: What can we do to get those guys spread out and put some stress on the linebackers with the bubbles and power-reads? And those are two plays right up the alley for Nebraska (so they could have success running them). Wisconsin doesn?t like to get its safeties down in the box as much. If you don?t like to do that, you will have less people in the box and that allows you to spread them out and pound them with the run. ? Wisconsin?s line is the strength of their offense and they have the tailbacks, too, in (Montee) Ball and (James) White. It wasn?t easy to defend them. ? I?m not concerned about Curt Phillips (ability to throw). They do what they do on offense regardless of who is the quarterback. I don?t see this offense being different no matter who lines up under center. ?

(Tight end Jacob) Pedersen made some plays on us. He?s good. He ran some crossing routes that our safeties didn?t adjust to early. ? They aren?t really complicated on defense, but they are really good at what they do. They don?t try to trick you as far as bringing a bunch of blitzes and lining up in different fronts. Everyone knows how to fit, they know where they want to be and that?s what makes them so tough. You aren?t ever going to get them out of alignment or in a mismatch. That?s what gives them a chance to be successful. ? I don?t think they have the greatest athletes up front or are explosive. But they have guys who know what their role is. ? The secondary is good. I wouldn?t say it?s great. I think Nebraska?s receivers will match up well with their secondary. Nebraska does a good job throwing the deep ball. I think Nebraska can take advantage of some things in the Wisconsin secondary. ?

The Badgers have had some trouble with some quarterback runs. We were able to do some things with our quarterback run, and they have much better personnel than we do. ? The first time they played, a lot of Nebraska?s runs came on the perimeter-because it?s hard to push around Wisconsin and run up the middle. ? Their front four (on defense) is pretty solid. We knew it was going to be extremely hard to run on them. We thought we would have to get them out in space. We didn?t think their outside linebackers or defensive backs were that good in space. But they did a good job mixing some things up on us and got after us. They played a lot better on game day than what I had seen on film. ?

They do what they do. They aren?t a huge blitz team. They rely on their front four to get pressure, and they sit back and force you to make plays. They won?t take many chances. ? The defense is more stronger than it is athletic. I thought we had a chance to make some plays in space against them. But they make it difficult at times to do that. ? I?d try to spread them out and run some zone-option stuff, try to get those guys in space. The more you get them spread out and playing in space, the better off you are. ? Their biggest weapon is their strength. They make it very difficult to run.