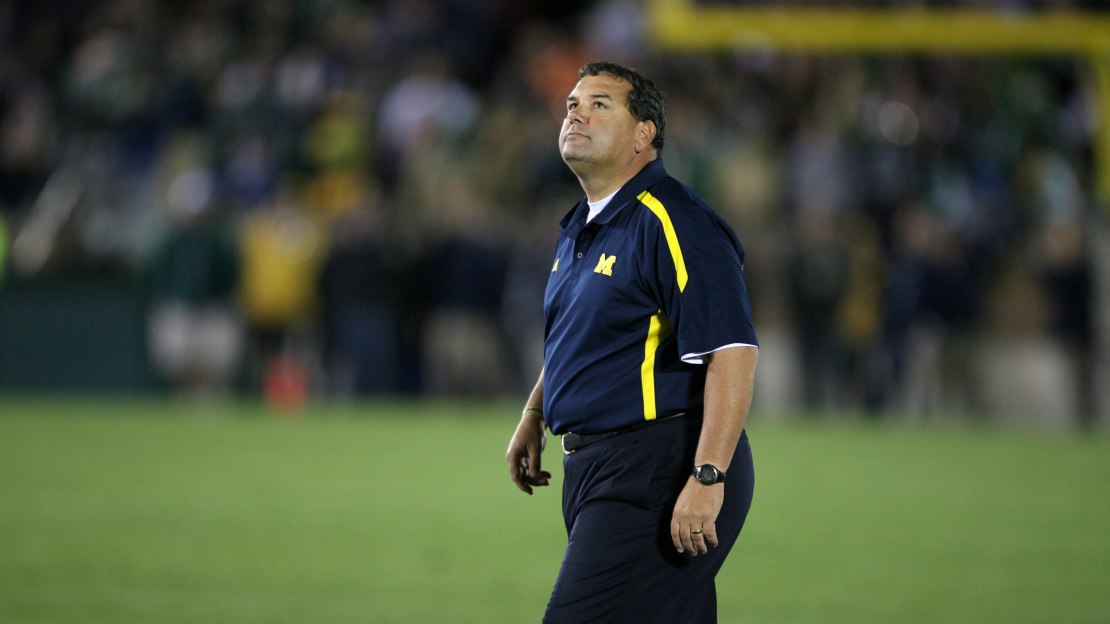 The good news for Michigan? The Wolverines are going to their second bowl in a row. The bad news? It?s not a BCS bowl. And a big reason why is because of uneven offensive line and tailback play. Oh, and Brady Hoke says there will be no quick fixes to either area. Read about that and other football news in my daily links.

How bad was the tailback production in 2012? Kyle Meinke of MLive.com says Michigan's tailbacks combined for just 940 yards this year, the worst production in the Big Ten and well off the league average of 1,634.8 yards. Six of the Big Ten's 12 teams had tailbacks who eclipsed Michigan's entire backfield. Every team had at least one tailback who rushed for more yards than Toussaint, Michigan's leading rusher at 514 yards.

All together now: Wow.

Penn State?s season is over. And, at 8-4, it was a rousing success. Now, onward to 2013. Here?s a look at depth chart projections at quarterback and running back.  Zack Zwinak is on top of a deep corps of backs. And I can?t wait to see Akeel Lynch, who redshirted. But quarterback is a bit more problematic. If Penn State gets a commitment from JC stud Jake Waters, he could be the guy in 2013. Steven Bench and incoming stud frosh Christian Hackenberg also will be in the mix.

Speaking of Penn State, despite a glorious season full of postseason honors, Bob Flounders of the Harrisburg Patriot-News feels there still were a few snubs.

Iowa ended with a 4-8 mark, riding a six-game losing streak to end the season. A big issue all season was an offense that never got on track under first-year coordinator Greg Davis, making him a lightning rod for criticism. But Kirk Ferentz says Davis will be back, despite howls from many fans.

The Hawkeyes averaged 310.4 yards, their lowest since 2000. Honestly, the defense wasn?t much better, allowing 5.54 yards per carry, Iowa?s worst since 2003. Up next, the Iowa staff is hitting the road recruiting. And mostly, the Hawkeyes are looking for defensive depth.

Can the repeated public attention on Kill's health become damaging to the program? Perhaps, Teague allowed, "but I haven't honestly thought about that–where is the line? I've been focused on the now–feeling good about our improvement, and knowing that he'll look deeper into this during the offseason."

Here?s hoping Kill gets this issue under control.

If Wisconsin wants a crack at beating Nebraska in the Big Ten title game, its offensive line must play better than it did last week in a loss at Penn State and in a loss at Nebraska earlier this season.

And the Badger defensive front also must rebound from a tough outing at Penn State, which carved up Wisconsin. Nittany Lions back Zach Zwinak ran for 179 yards. Only one other player eclipsed the 100-yard rushing mark in 2012 vs. the Badgers-Nebraska quarterback Taylor Martinez. Bottom line: Keep an eye on the Wisconsin rush defense vs. Nebraska rush offense matchup.

Early on in 2012, the Michigan State receivers struggled for consistency. But the group slowly rounded into form and figures to be a strength in 2013.

Players like Bennie Fowler stepped up, along with Tony Lippett and Keith Mumphery. And Aaron Burbridge has a bright future after a nice debut this season as a true freshman.